Why BMI is a flawed health standard, especially for people of color

… BMI [body mass index] was invented about 200 years ago in an era that saw the creation of pseudoscientific theories such as social Darwinism that were used to justify nationalism, racism and eugenics. The index was established by Belgian mathematician Lambert Adolphe Jacques Quetelet, who sought to measure the height and weight of the “average” man based on a sample of White, European men. He saw this average as an ideal. …

But, as we now know, statistics are racist.

Today, some experts argue, this measure is no longer relevant to the country’s population. America’s demographic fabric has dramatically shifted over the past century. People of color make up 40 percent of the U.S. population, and research has shown that Black and White people tend to have different body compositions. While the WHO released adjusted cut points for people of Asian descent, who have a higher risk of certain metabolic diseases at lower BMI, leading institutions have not adopted metrics specific to Latino and Black people. So when BMI is applied to everyone in the country, “we presume that how we were in the 1940s really reflects how we are in 2021 — and you can see how that might be problematic,” said Stanford.

I can never remember: Is it racist to not adjust medical measures for racial differences, or is it racist to notice race exists (which, of course, it does not)? Seriously, we now have a huge amount of data and all the computer processing power imaginable, so why not adjust for different races?

Stanford is among the researchers who have proposed adjustments to the index to reflect racial and ethnic variation in body composition. She and her colleagues used data from the National Health and Nutrition Examination Survey between 1999 and 2016 to suggest BMI curve shifts for Black, White and Latino people that correspond with metabolic risk. Their findings, presented in the Mayo Clinic Proceedings in 2019, suggest that cut points for Black, White and Latino men shift downward. Cut points for Latinas and White women also would be lower, while thresholds for Black women would be higher.

But others in the field favor scrapping the measure altogether, pointing to heightened national focus on systemic racism as a moment to call attention to disparate treatment that can stem from BMI — and usher in new approaches designed for all bodies. “This level of mistrust between Black communities and the health-care system needs to come to some sort of head, and I think we’re there now,” said Carter, the dietitian. 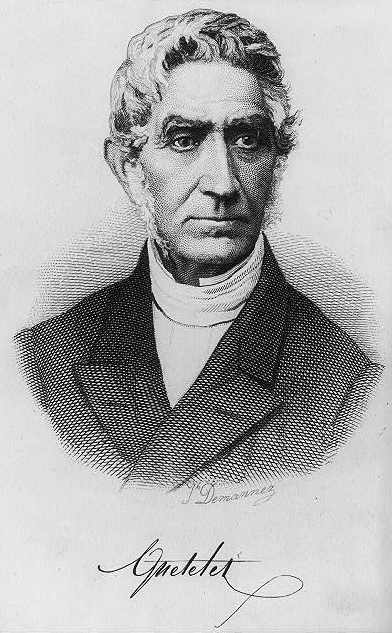 By the way, Quetelet was a giant. For thousands of years, governments had been collecting census data on people (I can think of at least three censuses mentioned in the Bible). But virtually nobody thought of doing much with the numbers. Wikipedia reports:

The new science of probability and statistics was mainly used in astronomy at the time, where it was essential to account for measurement errors around means. This was done using the method of least squares. Quetelet was among the first to apply statistics to social science, planning what he called “social physics”. He was keenly aware of the overwhelming complexity of social phenomena, and the many variables that needed measurement. His goal was to understand the statistical laws underlying such phenomena as crime rates, marriage rates or suicide rates. He wanted to explain the values of these variables by other social factors. These ideas were rather controversial among other scientists at the time who held that it contradicted the concept of freedom of choice.

… his concept of the “average man” (l’homme moyen) who is characterized by the mean values of measured variables that follow a normal distribution.

… Quetelet was an influential figure in criminology. Along with Andre-Michel Guerry, he helped to establish the cartographic school and positivist schools of criminology which made extensive use of statistical techniques. Through statistical analysis, Quetelet gained insight into the relationships between crime and other social factors. Among his findings were strong relationships between age and crime, as well as gender and crime. Other influential factors he found included climate, poverty, education, and alcohol consumption, with his research findings published in Of the Development of the Propensity to Crime.[11]

Anthropometry
In his 1835 text on social physics, in which he presented his theory of human variance around the average, with human traits being distributed according to a normal curve, he proposed that normal variation provided a basis for the idea that populations produce sufficient variation for artificial or natural selection to operate.

In terms of influence over later public health agendas, one of Quetelet’s lasting legacies was the establishment of a simple measure for classifying people’s weight relative to an ideal for their height. His proposal, the body mass index (or Quetelet index), has endured with minor variations to the present day.

Anthropometric data is used in modern applications and referenced in the development of every consumer-based product.