WASHINGTON, May 8, 2017 /PRNewswire-USNewswire/ — Today, the Immigration Reform Law Institute (IRLI) announced the first-time release of an official letter of reprimand signed by the Obama-era Justice Department (DOJ) against the controversial tax-exempt "hate-watch" organization, the Southern Poverty Law Center (SPLC) (letter found here). In the letter, DOJ states that the SPLC attorney violated professional ethics, among other things, by making personal and baseless attacks against IRLI, the Federation for American Immigration Reform (FAIR) and their staff during official immigration court proceedings.

In recognition of its expertise in the field of immigration law, the Board of Immigration Appeals (BIA), DOJ's highest immigration court, has for decades asked FAIR to submit friend-of-the-court briefs in difficult and complex immigration cases. As FAIR's legal affiliate, IRLI drafts and submits the briefs on FAIR's behalf. But in 2015, along with other anti-borders, globalist organizations, the SPLC filed a motion with the BIA to participate in a case in which FAIR's legal opinion had been requested solely to ask the BIA to terminate its relationship with FAIR, attacking and defaming the decades-old advocacy group as "white supremacist", "eugenicist", "anti-Semitic", and "anti-Catholic."

Thankfully, even the Obama DOJ saw the move as a shameful and discreditable attack. DOJ's disciplinary counsel fulsomely reprimanded the SPLC attorney, as well as attorneys from its partner-organizations, sending them a letter calling their attacks on FAIR "frivolous behavior", "derogatory name-calling", and generally showing "a lack of professionalism." DOJ also stated that the involved attorneys abused the amicus process and failed to aid the administration of justice.[More]

Here's a snippet from the letter, which is available in PDF, although it's a scan of a paper document, so it's not simple to copy the text: 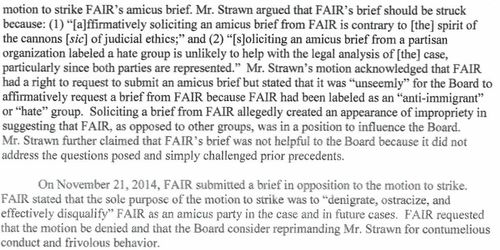 FAIR and IRLI aren't hate groups any more than we are. What they are is hated groups, and this is an example of the SPLC hating on them.

The idea is that the EOIR shouldn't request briefs from  IRLI because it's been "labeled" as  an "anti-immigrant" or "hate" group, and the people who are saying are the SPLC—who did the naming themselves. They're using their own "labeling" to try to drive people out of public life.

I've used this analogy a couple of times before, but here it is again—the SPLC's technique of declaring people or groups unclean, and the declaring others unclean for associating with them 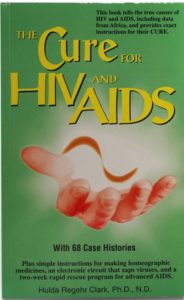 reminds of a quack doctor I heard of years ago: Dr. Hulda Regehr Clark, who claimed to be able to cure AIDS and cancer with glowing light machine that she'd shine on people. Her success in curing actual sick people was as limited as the SPLC's success in helping ordinary black people in Alabama—who are being displaced by immigrants with the help of the SPLC.

Apparently the legal professionals at the DOJ are an exception—even when Obama was in the White House.