This just in: people around the world don’t think immigration is a good thing for their country, particularly when there’s too much of it — which is the case now in many places.

We shouldn’t be surprised. Human nature is deeply tribal, and that is why we prefer to be around others who share our values and understand our jokes. Despite the daily dose of diversity propaganda from the media, human community is based upon similarities, not differences.

Bobby Duffy, the managing director of the polling company Ipsos observed, “People are twice as likely to think that immigration is bad for their country than think it is good.”

The Ipsos report may be seen here: Global Views on Immigration and the Refugee Crisis — 2017.

Here’s an important graphic that expresses the growing negativity toward immigration: 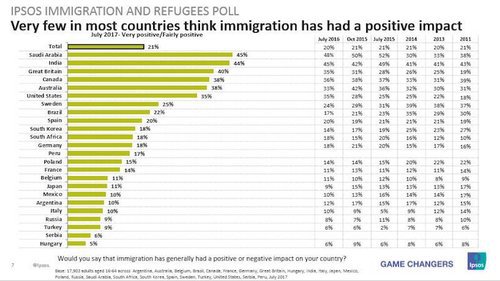 Interestingly, 39 percent of respondents in the 25 countries polled wanted their borders closed to refugees entirely. 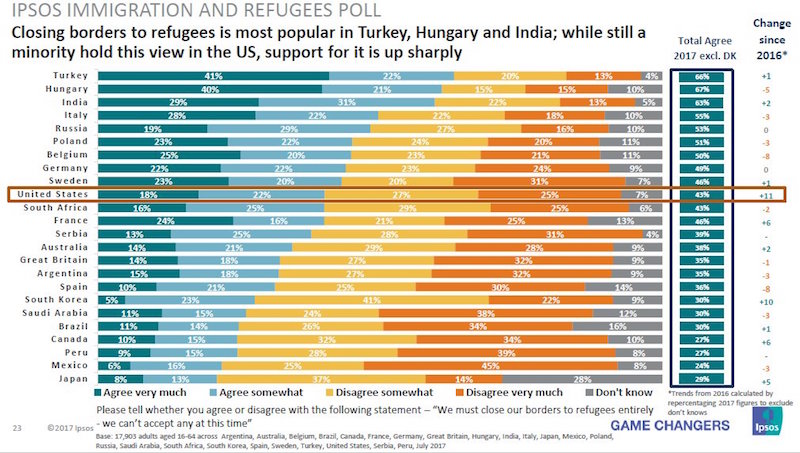 One important takeaway from the survey is how Americans are like the rest of humanity in wanting to preserve their own culture.

“Americans’ views on immigration and refugees mirror global unease. Both in the U.S. and worldwide, nearly half say there are too many immigrants in their country and four in 10 support closing borders to refugees entirely,” reports a massive Ipsos poll of 18,000 citizens in 25 nations who generally agree that global immigration is increasing, with “negative consequences.”

Among the findings: 75 percent of the respondents say “the amount of migrants” in their country has increased; 44 percent agree that “immigration is causing my country to change in ways I don’t like.” A quarter disagreed. Almost half — 48 percent — said there were “too many new arrivals” in their nation; 21 percent disagreed.