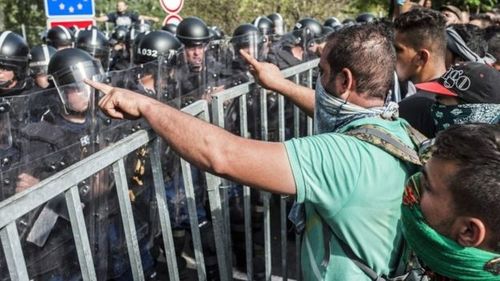 From the New York Times, an article that makes pretty clear who started the violence, while still giving some non-factual spin to make it seem like the leaders of Hungary are a cross between Hitler, Saddam Hussein, and Atilla the Hun.

Migrants Clash With Police in Hungary, as Others Enter Croatia By RICK LYMAN and HELENE BIENVENU SEPT. 16, 2015

HORGOS, Serbia — In one of the worst bursts of violence that this tense refugee summer has seen, Hungarian riot police responded on Wednesday to rocks, taunts and small fires set by agitated migrants at the border crossing here with water cannons, head-cracking batons and both tear gas and pepper spray.

Although the word was quickly spreading along the migrant trail that heading toward Croatia from Serbia was a better bet than trying to push through the heavily guarded border into Hungary, hundreds of straggling refugees continued to turn up at the crossing here in hopes that Hungary would change its mind and let them through.

But Hungary did not change its mind — prompting a grim demonstration of what can happen when an unstoppable force meets an immovable object. …

Tension had been building through the afternoon. About 2,500 migrants had set up camp along the narrow, two-lane road leading to the small crossing here — nothing more than a cluster of battered buildings and two lines of fence, topped with razor wire.

On the Serbian side of the green fence that marked the border zone was a squalid encampment of tents, swirling trash, wailing children and a few Serbian police officers, watching the chaos unfold. On the Hungarian side, beyond a second fence, were hundreds of police officers, some with protective shields and full riot gear, others in crisp uniforms and red caps, standing in formation and ignoring the crowds peeking at them.

One young man held up an orange sign reading “Right to Travel.” Others read, “Europe, your humanity is lost” and “Hungaria Please Help Us.”

What language were these signs in? Arabic? Hungarian? As a general rule, when people hold up signs not in their own or in a relevant local language but in English, they are trying to put something over on the low-information globalist audience.

The crowd had been told that, as of Tuesday, when new refugee laws went into effect in Hungary, migrants would not be allowed across the border if they had not been fingerprinted and approved, and that crossing the border illegally became a major offense punishable with years in prison.

But having gotten this far from Syria, Afghanistan, Iraq and other desperate countries, they grasped at hopes that the Hungarians would relent — just as they did when a huge migrant encampment sprouted outside the main train station in Budapest this month.

Aid workers moved through the crowd, trying to persuade the migrants to pull back and give Croatia a try, and many said that they were about to give up and follow that advice.

Still, the crowd grew increasingly impatient, and 200 or so people pushed up against the first gate, removing its razor wire and breaking it open at 3 p.m. A second, lower fence remained closed, a few yards farther into the border zone.

So, the migrants began a forcible invasion of Hungary.

A squad of about 100 riot police officers moved into the area just behind that second fence and an armored vehicle, topped with water cannons, came next.

“Open! Open!” the crowd chanted. Excited young men clambered on top of that first gate, which had been broken open, and began bouncing up and down on it, trying to knock it off its hinges.

The migrants started the clash by attempting to break down Hungary’s gate and invade the country.

All of a sudden, an invisible, noxious gas began to pour into the crowd from the Hungarian side.

I.e., tear gas, a traditional way to non-violently disperse an attacking mob. The article is written however to get NYT subscribers thinking about Zyklon B.

… The crowd collapsed into chaos and ran back into Serbia. Then, the crowd re-formed and slowly moved forward again. And again, there was a gas attack.

Like mustard gas on the Western Front, right? An obvious violation of the Geneva Convention, a WMD! Orban is the new Saddam!

Oh, wait, no, it’s no doubt tear gas … but that’s not the point, the point is that Hungarians are vicious WWI Huns using chemical weapons, or maybe WWII Nazis using death camp gasses.

Grabbing piles of wood and bits of trash, a few dozen migrants responded by building small fires in the road and surrounding fields, the acrid smell of burning plastic bags filling the air.

The armored vehicle fired its water cannons toward the crowd and the fires, putting some of them out and turning the area into a swamp.

Meanwhile, other migrants went behind a battered building marked Duty Free Shop and began breaking crumbling concrete and hurling pieces toward the Hungarian police, who were lined up just out of range.

… The stone-throwing subsided when word spread that the Hungarians had opened the second gate. The armored vehicle had moved about 50 yards farther into the border zone.

“It is open! It is open!” people shouted, and about 200 or 300 people formed cautiously on the Serbian side and began to walk slowly through the gate and toward the armored vehicle. “Thank you, Serbia!” one migrant shouted as he pushed forward, clutching his sad sack of belongings. …

As soon as the crowd drew nearer to the armored vehicles, dozens of riot police officers appeared, shields aloft. The crowd paused, waited, and then the police surged forward, batons swinging. With a crack, crack, crack, tear gas canisters arced through the air and fell all around the suddenly frantic crowd.

The gas swirled through the scampering crowd and, again, people begged for water and tried to thread a path through the chaos to fresh air.

“We heard the crowd had opened the gate, so we came to see,” said Mohamed Abdoulhanin, 25, a food safety supervisor from Damascus. “We expected them to let us in and they attacked us. Why?”

Because you were invading their country?