One trend we’ve been tracking here recently is Tiger Children taking over the social justice jihadi racket. You might think that just because you are poor and black that you’d get a leg up in the struggle for, say, a leftist NGO job, but … look out! The hardest-charging immigrants are coming from 10,000 miles away to outhustle you for your black privilege. These well-fed scions of Asia’s upper classes just want it all more than some poor African-American kid from the slums and they’re willing to be the most insufferable brown-nosers ever to get their hands on some juicy black privilege. 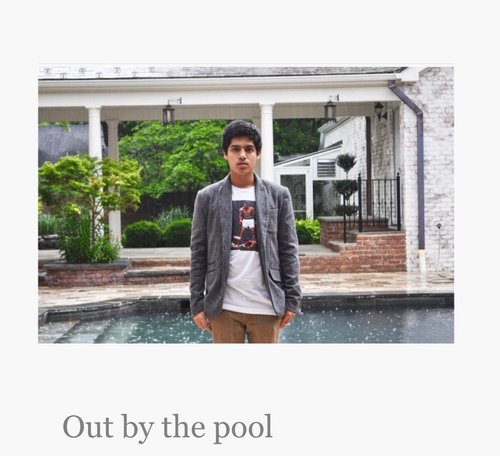 Is your activism performative or substantive? One New Jersey teen knew exactly how to show his answer to that question when filling out his application to Stanford University. Asked “What matters to you, and why?” the teen could think of only one thing: #BlackLivesMatter.

Ziad Ahmed wrote the hashtag #BlackLivesMatter 100 times, and that one act of activism paid off. According to a Mic profile of Ahmed, he received his letter of acceptance from Stanford on Friday.

Ahmed, who is a senior at Princeton (N.J.) Day School, said in an email to Mic: “I was actually stunned when I opened the update and saw that I was admitted. I didn’t think I would get admitted to Stanford at all, but it’s quite refreshing to see that they view my unapologetic activism as an asset rather than a liability.” …

Ahmed told Mic that his “unapologetic progressivism” is a central part of his identity, and he wanted that represented in his application.

He said that his Islamic faith and his commitment to justice are intertwined, and he would not be a good Muslim if he turned a blind eye to the injustices the black community faces on a daily basis. …

Stanford will be lucky to get Ahmed, who has already built a reputation in the activist community. The 18-year-old has been invited to the White House Iftar dinner, led Martin O’Malley’s youth presidential campaign, and interned and worked for Democratic nominee Hillary Clinton’s presidential campaign.

He’s also founded two youth organizations and delivered a TEDxTalk about the dangers and impact of stereotypes from his perspective as a Muslim teen.

In addition to Stanford, Ahmed was admitted to Princeton and Yale.

Ziad Ahmed is a 18-year-old senior at Princeton Day School.

He is an American-Muslim, Bangladeshi, and passionate social justice activist. Ziad founded a teen organization, redefy (www.redefy.org), committed to furthering equality. Redefy has grown immensely with over 250 students internationally on the team, over 3,000 likes on facebook, and over 60,000 hits on redefy.org.

His work has been commended by President Barack Obama personally, PBS, CCTV, and other notable sources.

Ziad has also worked for the Martin O’Malley 2016 Presidential Campaign, holding the role of Co-Head of YouthForOMalley. As he hopes to further his political engagement, he has also interned with Congresswoman Bonnie Watson Coleman in her district office. He has also interned for the US State Department as a VSFS intern. Furthermore, he also volunteered for the Hillary Clinton 2016 Presidential Campaign, focusing on Muslim Outreach efforts.

As an aspiring entrepeneuer, Ziad has co-founded JÜV Consulting Inc. (www.juvconsulting.com), which is a youth consulting confirm.

Slogan: “Current, Curated, Creative: Meet Generation Z, the generation after Millennials, the seemingly unidentifiable generation of current teenagers: sought after as customers and misunderstood as people. Understanding teens is posing a growing challenge to companies, non-profits, and brands everywhere.

He serves as the CVO of the company,

Oh, no, just as I feared: “Chief Visionary Officer.”

and is excited to further the platform that seeks to empower teens with the opportunity to communicate directly with businesses about what exactly appeals to youth. Additionally, he was invited to give a TEDxTalk in Panama City, Panama that can be viewed here:

Overwhelmingly though, Ziad is just your average teenager trying grappling with identity, struggling to balance it all, and pursuing his passions.

Maybe, hopefully, this kid isn’t for real and he’s just a Clickhole parody?

Probably not, though. He, his parents, and (presumably) their consultants have built quite a paper trail promoting their little darling. From Princeton Magazine:

A Local Activist Fighting Racism Has Dinner With President Obama

When Ziad Ahmed founded the organization Redefy to help teenagers recognize and remove cultural stereotypes, he never imagined that just two years later he would be dining with President Obama at the White House. But on June 22, that is exactly where the 16-year-old Princeton Day School (PDS) student found himself — and not just at any table. At the annual White House Iftar, which marks the traditional breaking of the fast observed by Muslims during Ramadan, the president chose to sit with Ziad and seven other young people and engage them in conversation. As if that wasn’t enough, Mr. Obama singled Ziad out in his speech.

“They’re Muslim Americans like Ziad Ahmed,” he said. “As a Bangladeshi-American growing up in New Jersey, he saw early on that there was not enough understanding in the world. So two years ago, he founded Redefy, a website to push back against harmful stereotypes by encouraging teens like him — he’s only 16; I think our youngest guest tonight — to share their stories. Because, in Ziad’s words, ‘ignorance can be defeated through education.’ He wants to do his part to make sure that ‘Muslims can be equal members of society and still hold onto their faith and identity.’ So we’re very proud of you, Ziad.”

“The whole thing was just mind-blowing,” Ziad said this week. “It’s the most prestigious event Muslim Americans get invited to. I just thought I’d be at some table, but Obama sat with us for an hour.”

The invitation to the White House came after MTV News profiled Ziad’s work with Redefy, as well as later efforts to inspire teen forums on racial profiling. Last April, the organization launched #PrincetonAgainstRacism, a social media campaign in which 125 portraits of people were taken at PDS and the Communiversity street fair, asking them to finish the prompt “I stand against racism because …” …

The son of a hedge fund manager

I’m guessing Ziad Ahmed’s dad is Shakil Ahmed. Here’s a 2011 profile of this “secret genius” during his days at Citi before he started his own hedge fund.

and a stay-at-home mom who does property management, Ziad was first inspired to take action the summer before ninth grade. “That summer, when I was 14, I noticed that in the community, people needed a platform by which they could be educated about minority experience,” he said. “I found a lot of ignorance — not malicious hate, just innocent ignorance. I wanted to initiate positive change at school, so I decided to create Redefy.”

The organization was officially launched that September. Today the leadership team has six people and representatives as far as Brazil and Pakistan, whom Ziad met through summer programs he has attended. …

The idea is to produce “measurable change,” Ziad said. “Our mission in 2014 was to promote integration. For this year, it is to reduce racial prejudice and hate.” … “It’s hard to hate somebody you know.”

But I could imagine making an exception in Ziad’s case.

Key to Redefy’s mission is equality for everyone. “All any of us want is a world that’s safe and accepting for our children,” Ziad said. …

Ziad and his team do workshops at local schools and hold bi-monthly conversations about current events. Media coverage led to the story by MTV News, “the most exciting thing that ever happened to me,” he said. “To get that coverage on national news was mind-blowing.” …

Among Ziad’s table-mates were Samantha Elauf, who won a Supreme Court case against the Abercrombie company after she was denied employment because she wore a traditional head scarf; Munir Khalif, the child of Somali immigrants who was accepted into all eight Ivy League schools and created an organization to help children in East Africa get an education; …

“[Obama] had read about me, and he told me to keep doing the work I’m doing. I was thrilled. A lot of people wanted to speak with him about different things, and he was so articulate, kind, and witty.”

Not surprisingly, the experience was an inspiration for Ziad to expand his work with Redefy….

“I was up till 4 a.m. thinking about this,” he said. “I want all kids in Princeton to get involved. Because one of my biggest obstacles has been trying to engage kids who aren’t particularly passionate about social justice. …”

And here are excerpts from the collected poems of Ziad Ahmed:

… a sliver of white light beamed through the purgatory

I winced not thinking anything of it …

My parents told me later

that they too were once blinded

by that same intense pasty flash .

My baby brother cried for the warmth of the sun

but we gave him the warmth of white milk

to drown out his sobs.

It took me a lifetime to realize that

that light was the whitewashing of our reality

and even in that word

we claim that oppression

I pull back the blinds

but I see nothing

that doesn’t see me.

Okay, I get it, you don’t like white people.

We dare not question the legitimacy of fact,

the thought of rebellion far too abstract.

The earth is flat.

Pluto is a planet.

English is the official language of this great nation.

The axis of evil is our greatest threat.

Homosexuality is a sin.

Native-American genocide did not occur.

Andrew Jackson is a hero.

The lies are everywhere,

so much so that I begin to question if I am aware.

In the summer of 2015, at a Cornell University camp for high school students, a teenager from California named Melinda Guo met a boy from New Jersey named Ziad Ahmed. They shared an interest in business, marketing, and philanthropy. “You’re probably going to be the only person I keep in touch with after this,” Ahmed told Guo.

… Ahmed was devoted to a diversity nonprofit he’d started, which had gotten him invited to the White House’s annual iftar dinner—held after sundown during Ramadan—the previous June. Guo and Ahmed hoped to work on something together, and that October, Ahmed called Guo with a pitch. He wanted to create a consulting firm focused on people like themselves: members of Generation Z. Those born after 1996 make up almost a quarter of the U.S. population and wield $44 billion in buying power.

… “One day I was like, ‘Wait, what about Jüv,’?” Guo says. It brought to mind juvenile or rejuvenate. Plus, the umlaut looked cool.

This is a key reason why I find myself more and more opposed to legal immigration altogether each year.

His dad worked at Citi and has his own hedgefund… Great, model immigrant, right? His son is still stealing slots from our “top” schools and Affirmative Action rights from blacks, all the while bashing the United States, our history, and our culture.

The boy has no original thoughts, has done nothing but pad his resume, but is still showered with praise and support from Hillary, Obama, and the other loser. Oh, dear, and he’s still oppressed!

It’s also sickening how our culture actively pushes ethnic minorities to despise the US. It’s just madness. Many immigrants come relieved and grateful to be in America, but then their children find new ways to feel oppressed, largely because they’re urged to in school.

In summary, I don’t see the benefit in accepting immigrants if their children will take our spots and hate us while doing it. If you’re able to work on STEM projects, maybe, but if you’re just here to enrich yourself in fields like finance or law, then stay home and fix your own country.