Indonesia Devolves into Sharia since the 2004 Tsunami

Its been 10 years since the terrible tsunami killed nearly a quarter of a million people around south Asian coastal areas in Thailand, India, Sri Lanka and Indonesia. In the years following, Western nations and organizations contributed considerable money and workers to rebuild the place.

One might think that experiencing some of the best that the West can offer would make hard-hit Indonesia friendlier toward the people who helped, but that has not been the case at all. Rather than appreciating western values of science, efficiency and charity, the worlds biggest Muslim country (population 205 million in 2010) has turned to Islams totalitarian sharia law.

Just a few years ago, Islamic apologists would point to Indonesia as a fine example of Muslims behaving moderately. Perhaps they did then, but now the virus of ultra-extremist sharia has been instituted as the law of the important Aceh province, and other areas of Indonesia are moving in that direction. Across the Muslim world, jihad is on the march, and that means less freedom for anyone in the vicinity and violence toward anyone deemed not Islamic enough. The result is physical punishment for drinking alcohol, suspected sex out of marriage and women wearing tight or western clothing. Women are also not allowed to straddle motorbikes (a common form of transport) but are made to sit sidesaddle a less safe position.

Last May, Amnesty USA reported in alarm, SHOCKING: Gang-Raped Woman in Indonesia Faces Caning for Adultery. Apparently the do-gooders have not read enough about Islam to know that it considers rape to be adultery and therefore the victim is punishable.

Below, an Indonesian woman is caned in Aceh for a violation of sharia. 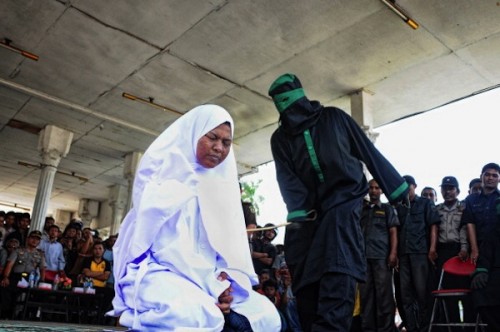 Even the politically correct Voice of America reported the difficulties of Indonesian sharia:

Incidentally, fundy Muslims should be careful when they wish for full-tilt sharia, judging by the failure of the Islamic State to provide basic needs. According to the Washington Post (Living conditions crumbling in Islamic State), water and electricity are available for no more than three or four hours a day and garbage goes uncollected in Raqqa Syria, with similar failures around the glorious mini-caliphate.

Naturally, it is unwise to admit persons as immigrants from such a barbaric culture to the west, as Europe has been learning. You dont add rotten apples to the barrel to increase the diversity.

It is a little past noon on Friday, time for Anshari and his troops to spring into action.

Their first stop is outside the gates of Meulabohs central mosque, where fruit and vegetable hawkers display their wares. The megaphone blares that its time for midday prayers, and Ansharis team, part of the sharia, or Islamic law, police, hovers over the street vendors to ensure that they shut down during the minutes of religious observation.

You should cover that, snaps one officer, pointing to a cart full of mangoes. The merchant quietly obeys.

Later in the afternoon, Ansharis uniformed squad will fan out to coastal spots and other areas where unmarried or unrelated couples may be trying to steal a moment alone. And theyll be on the lookout for women wearing tight clothing, or anyone drinking alcohol or gambling — all offenses under sharia that could result in public caning.

About 8:30 a.m. on Dec. 26, 2004, a massive tsunami welled up from the Indian Ocean and struck Aceh province, where Meulaboh is located. More than 230,000 people in Southeast Asia were killed. In this corner of Indonesia, one result has been a stricter adherence to Islamic law.

Some see it as partly a backlash against the influx of foreign aid workers, who helped build roads and hospitals, but also brought with them Western values. At the same time, some of Acehs Muslim leaders regarded the disaster itself as punishment for wayward living, and began calling for a greater focus on virtue and piety.

Aceh province is known as the terrace of Mecca because its thought to be where Islam first spread to Southeast Asia, carried from the northernmost point on the island of Sumatra.

Its the only province in Indonesia — a nation that boasts the worlds largest Muslim population but has a reputation for religious tolerance — where implementation of sharia is officially authorized. The arrangement is the result of a 1999 national law that gave Aceh special status aimed at ending a separatist war there.

The tsunami helped bring an end to that 30-year conflict by uniting Aceh residents in a common cause, putting the region under the lens of international scrutiny and wiping out vast numbers of fighters.

Meulaboh, the capital of West Aceh district, has one of the strictest regimens for enforcing sharia. Public dress restrictions go beyond the requirement that women wear head scarfs. In December, clerics in West Aceh went around spraying red paint on womens pants that were deemed too tight. Other locales in Aceh have banned women from dancing or riding a motorbike in a straddled position.

Human Rights Watch blamessharia regulations for the closure of at least 17 Christian churches in the last decade and the suppression of other minorities in Aceh, a province of almost 5 million people, nearly 98% of whom are Muslim.

How far Aceh goes with sharia is being watched closely in a country that is nearly 90% Muslim. Indonesias new populist president, Joko Widodo, has promoted pluralism and religious tolerance. Residents of Indonesias capital, Jakarta, last month inaugurated an ethnic Chinese Christian as governor.

Leading experts think whats been happening in Aceh in recent years is largely isolated and inward-focused. Its unconnected to broader Islamic movements that have political goals directed against the state or the West, says Edward Aspinall, an Australian National University scholar and author of Islam and Nation: Separatist Rebellion in Aceh, Indonesia.

Many people in the nations capital tend to view religion as a personal matter, not something the state should be involved in.

I dont think sharia should be implemented here because Jakarta has many different people from other backgrounds, says Enung Rustawijaya, a 51-year-old Muslim who works as a chauffeur.

Still, analysts voice reasons for concern. In recent years the level of religious intolerance has been rising and the national government has failed to respond, they say. Whether overzealous sharia police or clerics with spray cans, advocates of more rigid sharia enforcement have gotten little pushback from authorities or the public in Aceh.

Although only Aceh has the legal right to impose sharia, several dozen districts in other provinces have drafted bylaws derived from sharia with varying degrees of enforcement, according to Gregory Fealy, an Indonesia specialist also at Australian National University.

Aceh has become somewhat of a model of what sharia law looks like, Fealy says. Its had this kind of inspirational effect on hard-line Islamists.

Of added concern to some are recently passed provisions in Aceh that seem to extend the Islamic code of conduct to non-Muslims. Syahrizal Abbas, head of Acehs sharia office in Banda Aceh, the provincial capital, insists that non-Muslims and foreigners have nothing to fear. Those outside the faith, he says, can elect to follow sharia and its legal system or abide by Indonesias national laws.

The governor and I guarantee that sharia will not be applied to non-Muslims in Aceh, he says.

But in practice, it isnt so straightforward. National regulations arent so specific on whats acceptable clothing or about khalwat, the Islamic seclusion code that prohibits unmarried couples from being together in an isolated place. Requirements that women wear head scarves in government offices or market places dont distinguish between Muslims and non-Muslims.

During the monthlong fasting period of Ramadan, non-Muslim business owners in towns like Meulaboh have little choice but to close until mid-afternoon under the threat of raids and punishment.

One Chinese restaurant owner in West Aceh says he takes the entire month off and stays in Jakarta because its not worth it to open so late.

I cant sell enough to keep my vegetables from spoiling, he complains.

The most aggressive application of sharia is in rural areas, but even cities such as Banda Aceh have taken strict measures. No permits for movies have been granted since the last cinema was shut down about the time of the tsunami. This year, authorities shut down the dancing club in the lower level of the Hermes Palace Hotel, a four-star hotel where many foreign visitors stay. Hotel workers believe it was because dancers wore provocative clothing.

The hotel restaurants menu has no alcohol listed. But, as in other places around Aceh, drinking takes place furtively. At the Hermes, a waiter whispers to a visitor that there are two kinds of beer available, Guinness or the local lager.

During Friday prayer times in Meulaboh, KFC operators lower the shades and close the front door, but the side entrance remains open and a few customers go in.

Throughout Aceh, the reaction to sharia appears generally favorable, even among young people.

Its actually a good thing, says Ussuwaful Hasanah, 23, who manages a furniture store in Banda Aceh. It means people should represent why we are living in the terrace of Mecca.

Along the rocky banks of an estuary, 21-year-old Andhika sits shoulder-to-shoulder with his 19-year-old female companion. He says a local youth guard, unrelated to the sharia police, came around to ask him about his relationship with the woman. He told them they were engaged. If I werent engaged to her, I wouldnt dare come here, he says.

In Meulaboh, government officials argue that people outside Aceh have a distorted view of sharia enforcement. West Acehs entiresharia force, though up to 83 today from a dozen in 2005, is still just a fraction of the 700-plus regular police, says Jopi Saputra, a West Aceh government spokesman. He notes that West Aceh hasnt caned anyone since 2012.

Canings throughout the province, however, have been fairly regular, usually carried out with rattan sticks while the person charged is fully clothed.

Nongovernmental agencies in Indonesia say such practices arent good for Acehs image or ability to attract investment, something badly needed in the province.

Alaidinsyah, West Acehs regent and top official, makes no apologies for the way sharia is enforced. In an interview he says its misunderstood by outsiders.

They see sharia as something that is scary, he says. But the main focus, the real meaning of it is to make people understand how to live a good life, to do good things.

Article
Our Anti-White Arrows Will Blot Out The Sun Of Your Past: NYC Council’s Black, Latino And Asian Caucus Pushes To Remove 200-year Thomas Jefferson Statue