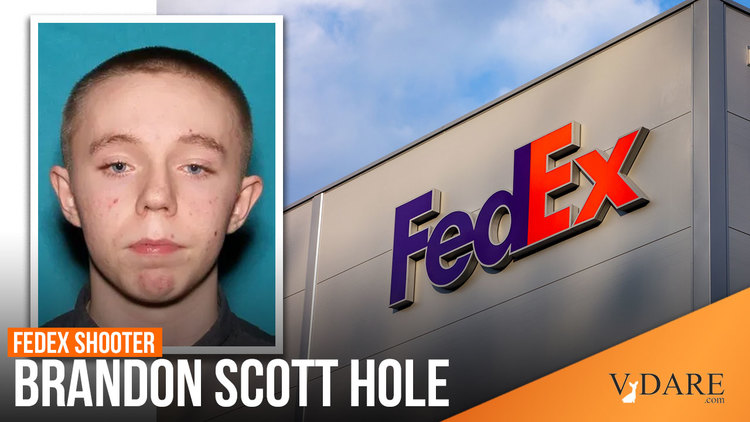 Indianapolis FedEx Shooting Isn't About Gun Control OR Racism, It's About Letting Crazy People Get Away With Murder

The shooter in Indianapolis, Brandon Hole, turns out to be a white guy, and suicidal as well as homicidal. (Black mass shootings, of which there are many, have a lower death rate, because the shooters are trying to get away with murder.)

"Mental illness was blindingly clear in the cases of Seung-Hui Cho... and a dozen other mass shootings in the past few decades.

The second is the whole concept of "not guilty by reason of insanity" which means that maniacs who actually kill people can't be executed, or even sent to real prisons. (Gomez, below, is in a mental hospital. His victim is still dead.)https://t.co/ZGJk2HjgfH

The FBI knew this Indianapolis guy was crazy, but seem to have been unconcerned because he was not "espousing a racially motivated ideology". https://t.co/Mm4dfIUuIJ pic.twitter.com/2ab2VgN8qY

Since this murder was committed with a rifle, I Tweeted

And if "gun control" is your solution to crimes like this this, remember it's already illegal for crazy people to have rifles...which are almost never used in crimes.

I linked to a post I made titled Rifle Murders Are So Rare, Florida Radiologist Had Only Ever Seen One Previous Case in which I noted an Atlantic article by Florida Radiologist Heather Sher, who had seen thousands of Florida gunshot wounds before the Parkland shooting, but had only seen one previous case of someone shot by a rifle. From The Trace, via The Truth About Guns.