Tribal representatives of immigrants commonly have their sensitivity meters set on High to detect any possible insult to their culture. A recent complaint comes from Indians residing in America who have a history of insisting on their specialness. (See my 2007 article, Dogs, Frogs and Dalits: The Indian Model Minority Has a Dark Side, for details.) 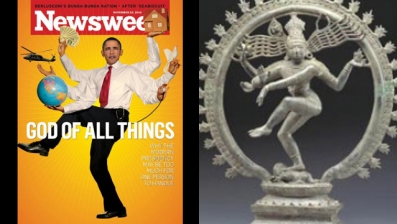 The Indians think Newsweak’s recent cover of a multiple-armed Obama offends their tribe because of the similarity to a Hindu image:

Newsweek’s depiction of President Obama on its latest cover has irked some Indian Americans who, fresh off Obama’s visit to the world’s largest democracy, are not happy with the image of the U.S. president as the Hindu deity, Lord Shiva.

The Newsweek cover shows Obama with several arms carrying policy issues while balancing on one leg. The headline reads: ”God of All Things” with a subtitle, ”Why the Modern Presidency May be too Much for One Person to Handle.”

Shiva, who is one of three pre-eminent gods in the Hindu religion along with Brahma and Vishnu, is considered the destroyer of the world, which must end, metaphorically speaking, in order to be reborn as a more universalistic place. However, the god’s purpose is not to foretell an apocalyptic ending.

Note to Indians: this image does not cause Americans to think that Obama is being compared to Shiva. Most citizens these days would see the magazine cover as cleverly representing multitasking, nothing more.

In other India news, the homeland still struggles with the strict class division of hereditary caste. Some wistful types like to imagine their country as a spiritual society because of yoga and meditation etc., but the inequalities of caste paint a different picture entirely.

Over the past five years, Nitish Kumar built roads, fought crime and helped rescue the state of Bihar from the near-anarchy that had condemned most of its 83 million people to a life of fear and poverty.

Now, he is fighting for his political life.

Kumar’s fate in the election in Bihar, a six-stage vote that began last month and ends Saturday, will test whether delivering development can also deliver votes in a region long dominated by caste-based politics. The outcome is being closely watched across India, a rising regional power that is plagued by corruption, poverty, a lack of infrastructure and raft of other development problems.

”If he loses, it will show that good governance is thankless,” said Shaibal Gupta, an economist at the Asian Development Research Institute.

One of India’s poorest and least developed states, Bihar has long been dominated by identity politics, with communities delivering their votes en masse to parties favored by leaders of their caste group. Since elections were never fought on the issues, the state’s leaders felt no pressure to deliver.

While other parts of India were beginning to enjoy the fruits of the country’s economic boom, Bihar remained a lawless backwater.