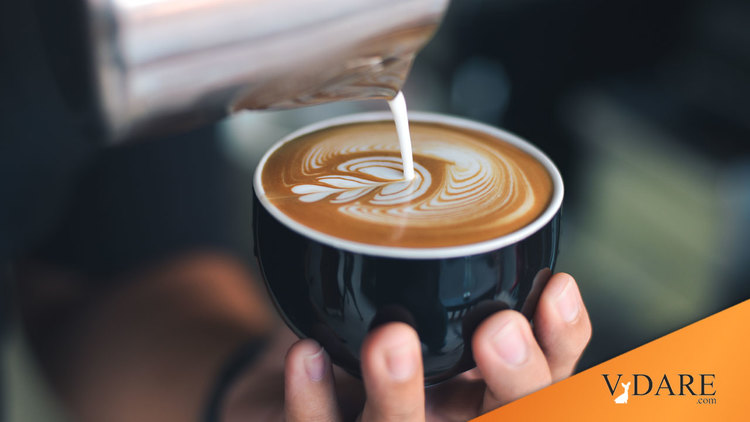 In The Memory Of George Floyd, A Black War Is Waged On The Unbearable Whiteness Of Coffee

When coffee is deemed racist and a symbol of whiteness, perhaps it’s time you admit the importance of cream.

The one-drop rule, and all…

For too long, much of Black history has been kept out of textbooks. Perhaps that’s why Black business owners are thinking out of the box to tell important, little-known stories—infusing history into the packaging, branding, and design of their products.

The coffee industry is a prime example. Black history and coffee history are deeply intertwined: Coffee was stolen from African plantations by Europeans in the 1600s, incorporated into the transatlantic slave trade in the 1700s, and today is a $100 billion industry run mostly by white executives. Whitewashed coffee shops opening in Black neighborhoods are often an early sign of impending gentrification.

But a wave of Black-owned brands are working to reclaim the Black birthright of coffee. Memphis-based Cxffeeblack put this story smack in the middle of its coffee bags. Text on the back explains how the coffee plant was stolen from Africa by two Dutch spies shortly before the first enslaved Africans arrived in Jamestown, Virginia. “We are finding our liberation as a people, and now we are liberating our birthright,” the bags read.

Besides unpacking the racist history of coffee on its packaging, merchandise is a major part of how Cxffeeblack sends its message—and that message is far more profound than what appears on typical corporate merch. “When George Floyd was murdered, we came up with the ‘Love Black people like you love Black coffee’ tagline,” Henderson says. “We made a few shirts, with a goal to sell 25 in a week. By the end of that week, we sold 200.” They’ve now sold nearly 2,000.

Cxffeeblack deliberately uses design to connect its products to Black culture. Henderson, who also does graphic design for the brand, pointed to Guji Mane, Cxffeeblack’s signature roast. The use of bubble letters is intentional, she explains—bubble lettering is credited to graffiti artist Phase 2, who popularized the art form in the early days of hip-hop in the 1970s. “There’s a reason there’s a drip in the lettering. Drip represents this swagger—it has street appeal,” Henderson says. “When you say someone has drip, it means they’re dressed really well. ‘Signature drip’ says we like to do it with a different type of swag.”

At its brick-and-mortar shop in Memphis (appropriately named the Anti-Gentrification Coffee Club), Cxffeeblack invites visitors to sip a fresh pour-over while enjoying a cypher (a freestyle hip-hop session) by local artists. As musicians and artists, Jones and Henderson are focused on building a community through their business.

“Black women are the original baristas on this planet,” Henderson says. “But when I walk into most coffee shops, people look at me as if I’m an outsider. I want Black people to come into my shop and feel dignified.”

Dope Coffee, based in Decatur, Georgia, also infuses its brand with Black hip-hop and history. The shop’s mugs feature illustrations of Black women in history who broke barriers, like Harriet Tubman and astronaut Mae C. Jemison.

According to Kim Crowder, a business consultant who specializes in diversity, equity, and marketing, Black-owned businesses often use design to tell Black stories in addition to selling their products. “They’re using communal language to connect to their culture,” Crowder says.

Support for Black-owned businesses surged after the murder of George Floyd—but Crowder says Black-owned companies have always used narrative elements in their branding. “Storytelling is a big part of Black brands. Black culture is built around community, food, and Sunday dinners. A lot of our history was never recorded in the way that white culture has been, so a lot of our culture is based on oral storytelling.”

While storytelling is a common part of marketing in 2022, Crowder says this looks slightly different for Black-owned coffee companies. “We’ve seen Whole Foods talk about the origins of coffee,” she says. “But these brands are reclaiming these stories from a Black perspective that is less rooted in a large conglomerate. Businesses like Cxffeeblack take the history back to our communities.”

Do you like your coffee black? Not really. But apparently the whiteness of coffee is appalling in 2022.

Anything too white is automatically bad. Even coffee, and those who consume and produce it.