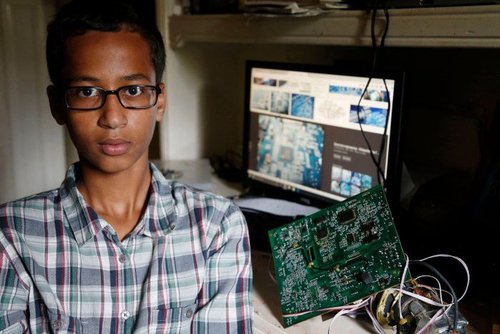 In Response To The Ahmed Mohamed Clock Case, Kyle Smith Asks Why White Kids Are "Getting Suspended From School for Nothing?"

The story about Ahmed Mohamed, the high school student in Irving, Texas who brought a bomb-like clock to school and got arrested, has become a cause célèbre  used to show the horrible racism and Islamophobia.  In reality the hysteria  over the case reveals the ideological and even regional biases of those who are going on about it .

"It took a nerd with guts to stand up against the most Islamophobic part of the country" declares an article on the Daily Beast entitled Ahmed Mohamed is the Muslim Hero America's Been Waiting For.

I agree that the school and police went too far, however, today's public schools are under a lot of pressure.  There are the  well-publicized stories of school shootings, zero tolerance policies and  publicity over bullying.  So school  administrators have to investigate anything that even sounds like it might portend violence.

Last school year, my elder son, who had never gotten into any real trouble in school before, had to be interrogated by  two administrators and a police officer,  over a really trivial incident involving silly things written (by several people)  on a piece of paper.

So this sort of thing goes on all the time, though it may not always reach the point of arresting a student, as in the Ahmed Mohamed case.

For a technical description of what Ahmed did, a video is circulating on YouTube in which electrical expert Thomas Talbot explains that it wasn't an invention at all,  just a commercial alarm clock which had been taken out of its case.

Over at the New York Post, Kyle Smith  has a good opinion piece on the Ahmed Mohamed case  entitled How Ahmed's Clock Became a False, Convenient Tale of Racism (Sept. 19, 2015).  Some excerpts:

When is America going to get serious about the problem of white kids getting suspended from school for nothing?

By now you’ve heard the story of Ahmed Mohamed, crowned by the Daily Beast "The Muslim Hero America Has Been Waiting For" after the 14-year-old brought to school a beeping, strange-looking homemade concealed device that turned out to be a clock.

School officials, thinking, as 95% of Americans would, that it kinda looked like a bomb, hauled him out of class. Police put him in handcuffs, and, even after the confusion passed, the boy was suspended from school.

That earned Mohamed a planned trip to the White House, a message of support from Hillary Clinton, an offer to stop by Facebook to meet Mark Zuckerberg and an invitation to be an intern at Twitter.

The police overreacted. Yet the device did look like something Ethan Hunt would lob out of a helicopter at the last minute in “Mission: Impossible.” As National Review’s Charles Cooke pointed out on Twitter, the scary-looking tangle of wires “looks a lot more like a bomb than a pop tart looks like a gun.”

Josh Welch, a white Maryland kid with ADHD who was 7 years old when he was kicked out of school for chewing a Pop-Tart into the shape of a pistol and pretending to shoot other students with it, must be puzzled.

Where’s his White House invitation? Where’s his chance to start networking at Facebook? His parents were forced to hire a lawyer and spent a year and a half just trying to get the suspension erased from the kid’s record. They were repeatedly refused.

... Alex Stone, a 16-year-old white kid from Summerville, SC, wrote a short story in which he imagined using a gun to kill a dinosaur. For this his locker was searched and he was arrested, handcuffed, charged with “disorderly conduct” and suspended from school for three days.

Obviously the White House and Mark Zuckerberg couldn’t be bothered to comment, but you’d think that, at the very least, Stephen King would have sent out a tweet expressing outrage that imagination was being punished....

Are white kids being punished en masse for dopey quasi-infractions because of their race? Of course not. That’s ridiculous.

But it’s equally absurd to suggest that you have to be Muslim, or brown-skinned, or live in Texas, to be subjected to overenthusiastic use of school discipline and police force.

“It never would have happened to a white kid”? It happens to white kids all. The. Time.

The main difference between the Ahmed Mohamed case and the others is that the mainstream media and the leftist point of view it presents just can’t let go of Ahmed. Ahmed is too useful to their narrative to be a one-day story.

...For 14 years and two weeks now, the left has been desperate to find some evidence, any evidence, that Muslims in general are facing deep-seated discrimination because a few Muslims attacked us on 9/11.

That American Muslims have instead mostly been treated with respect and courtesy ought to be a point of pride, but at no point will the left ever say, “Isn’t it great that we’re such a pluralistic and tolerant country?”

The left-led push to turn a man who was, as of 2004, an obscure state senator with no particular accomplishments, into the president four years later, was centrally and crucially about race. Everyone else was being subjected to a bait-and-switch.

Instead of being credited with enlightenment for being the only white-majority country ever to elect a black leader, now we’re told that everything is about racism.