The email I got a couple of days ago alerting me to this story said "Raceless crime in France: parent kills teacher".

Mother stabs French teacher to death in front of students

Albi (France) (AFP) - A female teacher was stabbed to death Friday in front of her pupils at a primary school in the southern French town of Albi by a student's mother, who was immediately detained.

"This morning, a mother showed up with a knife and stabbed a 34-year-old teacher in front of her students, for reasons that will be determined by the investigation," Albi prosecutor Claude Derens told AFP.[More] 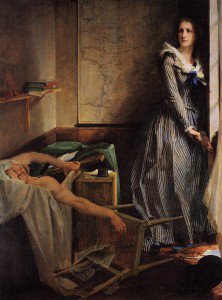 I tried looking for stories that did mention race, religion, or immigration status. It could have been a Frenchwoman going crazy and stabbing someone. This happens occasionally. (Pictured right: Charlotte Corday and Jean-Paul Marat.)

There weren't any stories that said anything about the race of the stabber.  I don't know if Agence France-Presse knew for sure themselves, if Albi prosecutor Claude Derens didn't tell them. (No, they wouldn't ask, why would you think that?)

Well, Mark Steyn found the answer to this question. Born in Canada, educated in England, and legally resident in New Hampshire, Steyn actually speaks French, and found a story in the French language that has a fact concealed in it. [Une institutrice tuée par une déséquilibrée,  Google Translate, July 5, 2014]

In The Challenges of Diversity, July 8, 2014, on his own site Steyn writes:

In Europe, which has southern-border issues all of its own, a French teacher, 34-year-old Fabienne Calmes, was murdered in front of her kindergarten class by the mother of one of her pupils. Murders of schoolteachers are very rare in France, and the grim fate of Mme Calmes galvanized the nation. Over at The American Thinker, Selwyn Duke noticed that the press had given extensive coverage to every aspect of the case - Fabienne, her husband, their two young children, shocked community, etc - except the nature of the killer. Indeed, the French state has charged "the mother" with murder but has still not released her full name.

In a healthy journalistic culture, crime reporters would be climbing over each other to get the scoop on the psycho dame who killed the beloved kindergarten teacher devoted to her charges. But not this time... You have to go seven paragraphs down into this story from La Dépêche to find out anything about the murderess, and then glossed over very lightly:

Ah. So Mme Calmes was killed by a Moroccan with a Spanish passport who's on welfare.

Best to downplay it all then, in the interests of cultural sensitivity. What happened was a "tragedy", as M Hollande says, but one of those vague, blurry tragedies, nothing too specific or detailed...

The developed world has chosen civilizational suicide as a moral virtue...our growing diversity is a strength that we will continue to celebrate - even unto death.