Boehner Won't Impeach. What Next? 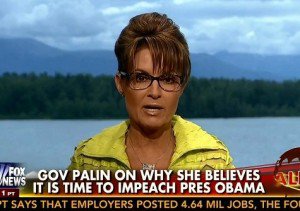 In a move that surprises positively no one, Speaker John Boehner moved quickly to attack his own base and protect President Obama by saying that he will not move to impeach the President.

House Speaker John A. Boehner (R-Ohio) disagrees with Republicans calling for the impeachment of President Obama.

Former GOP vice presidential candidate Sarah Palin on Tuesday joined a growing chorus of Republicans calling for the impeachment of Obama, writing in an op-ed that the influx of young illegal immigrants over the southern border "is the last straw that makes the battered wife say, 'no mas.' "

"I disagree," Boehner said when asked by reporters Wednesday morning. When a reporter pointed out that some House Republicans also are calling for impeachment, Boehner said again: "I disagree."

What next Mrs. Palin?  If the GOP won't confront the President, then who will?