Female Genital Mutilation (FGM) is a cultural and Islamic practice that is performed commonly on young girls with the hope that it will make them uninterested in sex when they get older. It is sometimes fatal because of unsanitary conditions, and may cause lifetime pain in victims.

A 2012 report found that 100,000 women residing in Britain have been cut, so the current item about a Birmingham hospital is no surprise. 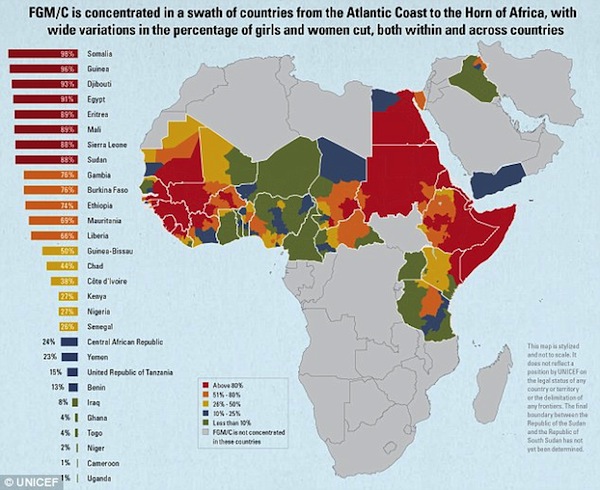 SunTV’s Brian Lilley discussed the recent report that FGM is “rampant” in England.

Don’t think such barbarism doesn’t occur in the United States. “Vacation cutting” happens when African immigrants send their girls “home” to remake their bodies according to an oppressive ideology. And because ultra-diverse immigration is still favored by Washington, FGM is reportedly increasing.

Back to diverse Britain:

Doctors at one English hospital have dealt with 1,500 cases of Female Genital Mutilation (FGM) in just five years, it emerged today.

Figures from Birmingham’s Heartlands Hospital reveal that staff see six patients who have been subjected to the barbaric procedure every week.

Nationwide, 15 new cases of FGM are reported to hospital around the country every day. But the victims of the shocking practice are clustered in certain areas, which explains the high rate in Birmingham.??Heartlands saw 349 cases in 2013, following 288 cases in 2012, 316 in 2011 and 317 in 2010.?It is thought to be one of the centres which has seen a large number of the 463 cases now being identified in England every month.

NSPCC Head of Child Protection Operations John Cameron said: ‘These figures show the NHS is consistently seeing a high number of FGM cases every month.??FGM is a live public health issue and it is vital all health professionals are trained to spot the signs of FGM and that girls who are subjected to this brutal practice get the post-traumatic support they deserve.

‘We need to ensure doctors, midwives and other healthcare professionals are working effectively together with children’s services to support and protect FGM victims and their family members.’

The records show the number of women recorded as having been subjected to the practice, even if they were in hospital for another reason.??Campaigners have pointed out that the numbers may be just the tip of the iceberg, as only those women who have sought specific medical treatment are included in the data.

It is believed the vast majority of cases are women who were born abroad and then moved to the UK in childhood or later life.

Victims are often identified when they come in to have infections and other conditions linked to the procedure treated, while others are noted when they attend for pre-natal checks.??FGM has been illegal in the UK since 1984 and since 2003 anyone taking a child out of the UK for the practice faces 14 years in prison.

Despite the rise in hospital cases and an increase in reports to police in 2014 there has not been a single conviction in the UK.

Research by the charity Equality Now and City University last year estimated more than 100,000 women have migrated to England and Wales after suffering FGM – up more than 50% since 2001.?The Birmingham hospital’s figures were released after the Muslim Women’s Network told the West Midlands Police and Crime Panel that the levels current support and counselling for victims – many of whom suffer flashbacks – are not good enough.

The charity said the latest case it uncovered was just last week and involved a young Yemeni girl from an unnamed Birmingham school.

Shaita Gohir MBE, who is chair of the charity, told the panel: ‘We need to get funding for specific counselling in this area.’

Birmingham is one of the most ethnically diverse cities in Britain. In the 2011 census, more than 280,000 residents – 26% of the city’s population – gave their ethnicity as Asian or Asian-British, 93,000 said they consider themselves Black or Black-British and 10,900 listed themselves as Arab.

Earlier this month, Britain’s top family judge, Sir James Munby called on local councils to do more to battle what he called ‘the great evil’ of FGM.

He said: ‘Plainly, given the nature of the evil, prevention is infinitely better than cure.

‘Local authorities need to be pro-active and vigilant in taking appropriate protective measures to prevent girls being subjected to FGM.

‘The court must not hesitate to use every weapon in its protective arsenal if faced with a case of actual or anticipated FGM.’