Walter Russell Mead discusses in a WSJ opinion piece why immigration is a contentious issue by sketching out the opposing teams — elites vs. citizens, rich vs. poor, globalists vs. nation-statists.

He also referred to the potential revolutionary change if “robots will take all the jobs” which is always good to see in the non-tech press.

Unfortunately, he drops the ball on vital points: for example, the phrase “ugly nativism” appears twice, as if citizens insisting upon immigration enforcement are some sort of racist knuckle-draggers. No, we are merely sick of the slow-motion invasion by hostile foreigners.

Plus he ends with a plea for a “sustainable middle ground” of continuing immigration at some level when the automation that he recognizes will disappear jobs by the millions — as it already has, noticeably in the recession starting a decade back. Today’s situation calls for an honest look forward, not imagining a non-existent middle ground. 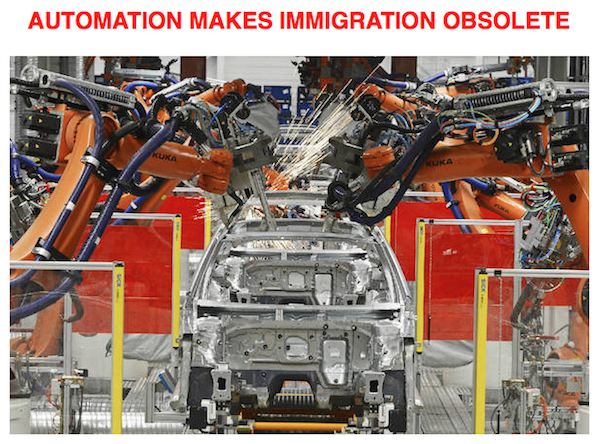 The future will be automated, and we should be discussing how to deal with it.

A debate between naive elitism and ugly nativism only impedes pragmatic reforms.

The three-day shutdown in Washington shows the immigration issue remains potent. In 2016, it powered Donald Trump’s triumph over the Republican and Democratic establishments while tipping the U.K. referendum toward Brexit. Anyone who hoped voters would get it out of their systems must be sorely disappointed.

This weekend Washington ground to a halt as an impasse over “Dreamers” left the government without funding. In Germany, Angela Merkel, once the unchallenged master of European politics, is still struggling to form a coalition four months after leading her party to its worst election result since the 1940s. German politics has been so scrambled by Mrs. Merkel’s 2015 decision to admit one million Middle Eastern and Afghan refugees that the far-right Alternative for Germany is in the Bundestag for the first time.

What makes immigration radioactive? Partly it’s that no other issue, not even economic inequality, drives such a deep wedge between elite and mass opinion. Elites almost always support immigration on both economic and moral grounds. But many voters worry their neighborhoods will be exposed to the social consequences of mass immigration, and that their wages will decline as immigrants compete for jobs. To them, the failure of establishment politicians to control immigration looks like either incompetence or treachery.

But even as the pressure on people in poor countries to emigrate increases, the economic case for rich countries to open their doors to low-skilled workers is getting weaker, thanks to automation. It can’t simultaneously be true that robots will take all the jobs and that the West needs millions of new immigrants to do the grunt work.

The politics of migration challenge both center-left and center-right parties. In the U.S., pro-Trump populist Republicans are estranged from the GOP establishment, while the Democratic establishment, militantly cosmopolitan and pro-migrant, hemorrhages support among blue-collar voters. European politicians are similarly flummoxed, as parties on the center left and center right both lose support to populists.

In the 19th century, migration into the U.S. and much of Europe was largely unregulated. As the flow of migrants increased, the doors slammed shut in one country after another. The United States imposed draconian restrictions in 1923, and not even the horrors of Hitler’s Reich persuaded Americans to make room for desperate refugees.

To avoid repeating these tragic events, immigration and refugee policy must find a sustainable middle ground between naive and unrealistic cosmopolitanism on the one hand and ugly nativism on the other. In a world where more people than ever are on the move, the window to head off nativist sentiments with pragmatic reform may be narrower than we think.