Wikipedia describes the U.S.'s wackily perverse approach to dealing with illegal aliens from Cuba as follows:

The wet foot, dry foot policy is the name given to a consequence of the 1995 revision of the Cuban Adjustment Act of 1966 that essentially says that anyone who fled Cuba and entered the United States would be allowed to pursue residency a year later. After talks with the Cuban government, the Clinton administration came to an agreement with Cuba that it would stop admitting people intercepted in U.S. waters. Since then, in what has become known as the "Wet foot, Dry foot" policy, a Cuban caught on the waters between the two nations (with "wet feet") would summarily be sent home or to a third country. One who makes it to shore ("dry feet") gets a chance to remain in the United States, and later would qualify for expedited "legal permanent resident" status and eventually U.S. citizenship.

Thursday's (January 12) announcement by the vestigial Obama administration ending this "wet foot, dry foot" scam comes as a surprise, at least to me—now Cuban dry-footers will be handled just like illegal aliens from anywhere else.  That sounds like something to celebrate, so what's the catch?  I don't know; maybe it embodies expectable Obamoid nefariousness that's only apparent to immigration patriots above my pay grade.

In Ordinary Cubans fret about end to US immigration policy (January 13), Associated Press reporters Andrea Rodriguez, Alicia A. Caldwell, and Julie Pace hint that they share my puzzlement, writing:

Obama is using an administrative rule change to end the policy. Donald Trump could undo that rule after becoming president next week. ... But ending a policy that has allowed hundreds of thousands of people to come to the United States without a visa also aligns with Trump's commitment to tough immigration policies.

On November 15, in With Trump Elected, Immigration Enforcers Breathe A Collective Sigh Of Relief, I wrote about the understandable reaction to Trump's win among professional immigration patriots.

It turns out that Thursday's policy-change announcement was also greeted with enthusiasm by the same category of professionals—here are the first four tweets in an exchange initiated Friday morning, January 13, by Roque Planas, a Texas-based reporter on immigration and Hispanic politics for the Puffington Host: 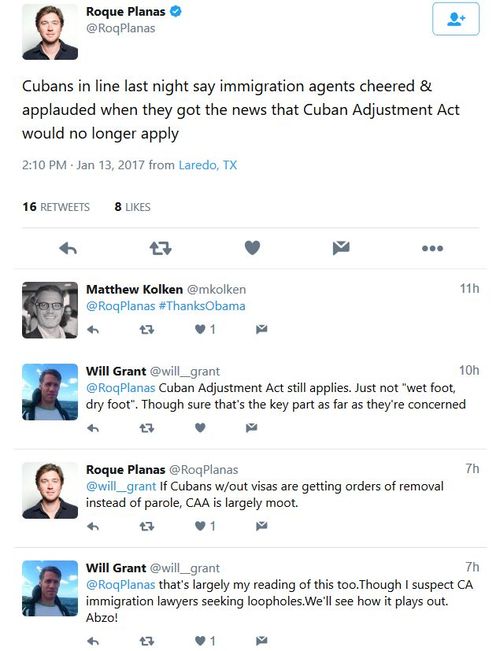 The agents—our agents, who've been under the thumb of this minority occupation government—cheered and clapped when they learned that dry Cuban feet no longer possess that ol' immigration magic.  If they're impressed by the change, perhaps there's no catch, after all!

This enthusiasm among those in the trenches for actually enforcing our immigration laws brings to mind the website that used to be hosted by Juan Mann.  Mr. Mann is a lawyer who wrote—presumably pseudonymously and apparently from inside the immigration bureaucracy—approximately 200 articles for VDARE.com.  Memorably, he named his separate (and now defunct) website "Deport Aliens."  Using the Wayback Machine, you can still see what it looked like.  (Ignore the fact that it displays the current date.)

And we can hope that VDARE.com's current contributor and immigration-bureaucracy expert Federale will weigh in on whether there's any catch in that "wet foot, dry foot" news.