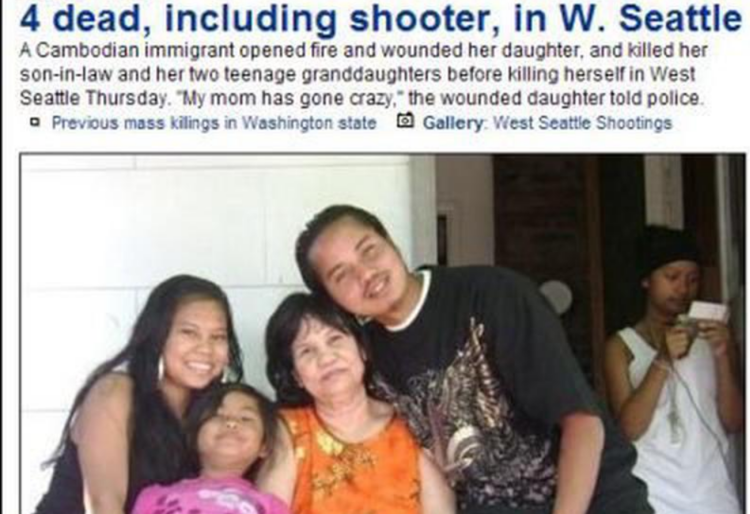 An Asian woman, apparently crazy, shot three members of her family in a shooting spree in Seattle:

'My mother has gone crazy': 4 die in West Seattle shooting

A woman fatally shot three people before killing herself Thursday afternoon at a house in a West Seattle neighborhood.

September 23, 2010 Police found four people dead from gunshot wounds inside a West Seattle home after a wounded woman ran from inside yelling, "my mother has gone crazy."

Among the dead was the woman believed to have been the shooter, described as an Asian woman in her 50s, said Seattle police spokesman Sean Whitcomb. She apparently took her own life as police were outside the home.

According to police, the deceased were found inside a house in the 9400 block of 14th Avenue Southwest, which is in the Highland Park section of West Seattle. The home is reportedly shared by 11 people from two families, according to a woman who said her brother was among the residents.

Police described the victims as two females in their late teens, a man in his 30s, and the shooter, who was in her 50s. Two handguns were also found at the residence, Whitcomb said.

Officers responded at about 1:30 p.m. and heard gunshots from inside the house, Whitcomb said. A wounded woman ran from the house, yelling "my mother has gone crazy," police said.

The wounded woman, 42, was taken to Harborview Medical Center. She is expected to survive, according to a hospital spokeswoman.[More]

The immigrant angle is still a matter of deduction, since the paper doesn't want to say that they're immigrants. The part about two families and 11 people in one house is typical, and so is this:

Several people who live in the home where the shooting took place gathered at the nearby Magic Lanes Casino, where some of them work. Among them was Sa Loeun Sun, who said police have not told them what happened.

The name Sa Loeun Sun comes from the Vietnam/Cambodia region, and the Magic Lanes Casino features games popular with the Asian community, which is big in the Seattle area. Still, everyone might have been happier in the long run if the families had stayed home, and the Seattle Casino had hired Americans.