We are told by diversity experts that Muslims from Europe are more “moderate” (less head-choppy) than their Arab ummah-brothers. But wanna-be bomber Sami Osmakac (pictured below), a naturalized citizen from Kosovo, had some extremely evil plans for Americans, as we learned in his recent trial. (See my 2012 blog, Florida: Muslim Immigrant Arrested for Bomb Plot.)

Trials are wonderful events, particularly when they reveal details about the behavior of jihadists residing in America. The public is cheated every time the government arranges a plea deal with a terrorist, because vital information about public safety is shut off. We need to know what is going on in our own country with the enemies that Washington welcomes as immigrants and refugees. 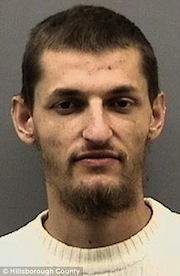 As usual, a Muslim terror trial is local news only, ho hum stuff according to the information keepers of the mainstream media.

TAMPA, Fla. — A Florida man was convicted Tuesday of trying to buy weapons for what authorities say was a planned terror attack on a Tampa casino and bar.

It took five hours for a federal jury to find Sami Osmakac guilty of possessing an unregistered automatic weapon and attempting to use a weapon of mass destruction. He faces life in prison at an Oct. 7 sentencing.

The 27-year-old was arrested in 2012 after authorities said he tried to buy weapons, including a car bomb and an AK-47, from an undercover agent he thought was an arms dealer.

During closing arguments, federal prosecutor Sara Sweeney said Osmakac wanted to remotely detonate a car bomb near a Tampa Irish pub, then take hostages and start a shootout at the Hard Rock Casino in order to get Muslim prisoners released. He then was going to blow himself up when police closed in on him, Sweeney said.

“The most powerful thing you can see are the defendant’s own words,” she said, referring to a video he recorded before he was arrested. “His intent was to commit a violent act in America.”

During the three-week trial, jurors heard from psychiatrists who said Osmakac is mentally ill. Prosecutors also played videos recorded by a confidential informant.

In one of the recordings with the informant, Osmakac referred to blowing up bridges over Tampa Bay.

“If you take those bridges out and they won’t have food, medicine, they be shocked nobody can go to work, two million people, three million people will be sitting ducks,” referring to bridges connecting Pinellas County to Hillsborough County.

Defense lawyers said he was manipulated by the FBI and a paid informant.

George Tragos, Osmakac’s attorney, said his client had no idea how to use the fire power an undercover FBI agent provided.

“The FBI said anything they want to Sami and he believed them,” Tragos said. “He had no idea what was going on. He had these guys leading him around by the nose.”

Prosecutors said in March of 2011, six months before the undercover investigation began, Osmakac quit his job in a pharmacy and traveled overseas with the idea of waging jihad against the “oppressors,” his name for American and NATO troops in Afghanistan and Iraq. But he was unable to enter either country, partly because he didn’t have the proper visa.