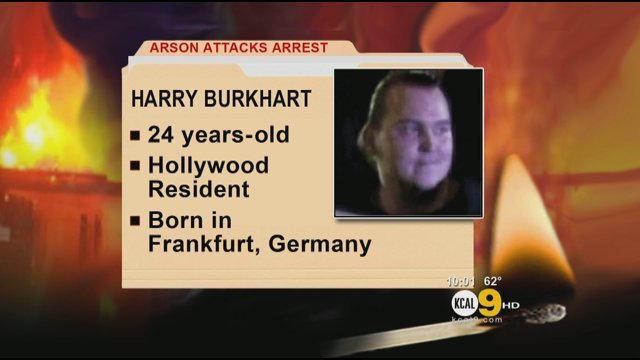 The immigrant arrested in connection with 55 (!) arson fire in Los Angeles is named Harry Burkhart. I wondered yesterday if he was a Turk or North African living in  Germany, rather than a regular German, because burning cars is a regular thing with Muslims in Europe.

Actually, he turns out to be a white guy with a pony tail. LA Weekly has some interesting facts and leaks:

The man who terrorized L.A. for three nights with a series of 53 arson fires turned out to be a 24-year-old from Germany identified as Harry Burkhart, at least according to authorities.

"I hate America" were the words he reportedly uttered after he was pulled out of his car during a traffic stop at Sunset Boulevard near Fairfax Avenue shortly after 3 this morning following another outbreak of fires in nearby West Hollywood.

Facts and or leaks from the LA Weekly story: