Illegals Can Be Replaced: UBR-1 Robot Is Designed to Work Alongside Humans 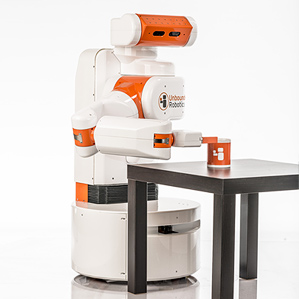 Don’t worry, little human, robot designers are concerned with making the working environment comfy regarding the machine-people interface. That’s the message from the producers of the UBR-1 robot, the latest in smart machines that can work in manufacturing or other assorted tasks.

We’ve heard this mendacity before, that advanced mechanization is being brought in to “help” employees with those “boring, repetitive jobs” — plus being conveniently cheaper.

“Our people have really taken to Baxter [the robot],” said [Factory VP Lowell] Allen. “He’s non-threatening. He’s helping them do their job.” (Bringing back jobs to the U.S. via the robot, CBS News, October 5, 2013)

UBR-1 is apparently the next step forward from Baxter. It is more expensive ($50,000 versus Baxter’s $22,000) but can scoot around on its own and can be programmed using Linux to perform a wide variety of functions.

The MIT Technology Review has a product review: Why This Might Be the Model T of Workplace Robots, October 21, 2013. By that it means the UBR-1 may be the breakthrough machine that could convince employers to embrace the technology more widely.

Every advance in robotics and other automation means improved efficiency for business without the need for additional workers, which is partially the reason for the jobless recovery, in addition to the administration’s backward economic policies of course.

With the smart machine revolution picking up speed, America certainly should not double legal immigration as legislated by the Senate to take jobs that are disappearing every day.

The UBR-1 is a 4-foot tall, one-armed robot that could make warehouses and factories more efficient by performing tasks normally done by human workers.

Unlike the industrial robots widely used in manufacturing today—usually large machines isolated from people for safety reasons—this robot can work alongside humans or autonomously in a workspace filled with people.

The UBR-1 is made by Unbounded Robotics, which is based in Santa Clara, Calif., and is a spinoff of robotics research incubator, Willow Garage. The company began taking orders for the UBR-1 on April 17 and expects to ship the $50,000 robot to customers in August.

“We see the robot as doing tasks, they could be dull, they could be dirty, they could be dangerous and doing them repetitively all day in a light manufacturing environment,” said Melonee Wise, Unbounded Robotics CEO and co-founder. Those tasks include stocking shelves, picking up objects and assembling parts.

The UBR-1 isn’t designed for small component assembly, but it can manipulate objects as small as dice or a Lego piece, Wise said. Unbounded Robotics is targeting companies that want some automation to speed up their manufacturing process, but can’t afford to fully automate their businesses.

“There’s a real gap between full automation and no automation,” Wise said. “We feel that this robot can be the solution.”

Despite all of the components and intelligence built into the robot, it isn’t ready to join the production line just yet. The UBR-1 is essentially a blank slate that users must program to perform different tasks.

The UBR-1 runs a version of Ubuntu Linux and the open-source Robot Operating System, which allows developers to program a wide variety of functions that suit different needs. For example, if a company needs the robot to pick objects off of a shelf and also assemble parts, it would download two apps for the same robot.

“The advantage to our robot is we see it being used in many businesses doing many different things,” Wise said. “There’s a lot of value that can be created by creating an application infrastructure on top of a platform like this robot.”

The robot weighs 160 pounds and can travel 2.23 miles an hour, operating up to five hours on a full battery. It connects via Wi-Fi and USB ports and has a fourth-generation Intel Core i5 processor. Other hardware includes a microphone, speaker and laser scanner. A PrimeSense 3D sensor in its head is used for vision and other forms of perception.

The robot’s arm is capable of moving along seven axes of motion and weighs about 40 pounds. Users don’t feel the actual weight of the arm when the robot is turned on, however, as motors compensate for gravity and make the arm feel lighter than it really is.

The app will work by having the robot record the motion of each individual joint as a user moves the arm and then playing it back when requested. It’s possible to join the movements together to create larger combined motions, Wise said.

Unbounded Robotics is also adding functionality to the robot by working with pilot companies to develop manufacturing apps.

“In five years, we hope to see the robot in many different businesses doing diverse tasks,” Wise said.