Remember the horrible crash in February that killed four kids in Cottonwood, Minnesota? An illegal alien driving a minivan ran a stop sign and smashed into a schoolbus.

The trial is done, and the Guatemalan is guilty on all counts. A sentencing date has not yet been set.

In the end, a Kandiyohi County jury believed that Olga Franco was behind the wheel of a van when it plowed into a loaded Cottonwood school bus nearly six months ago, killing four students and injuring 17.

The 24-year-old Guatemalan native, who had claimed that her boyfriend was driving the van, showed no emotion when the verdict was read — guilty on all 24 counts, including criminal vehicular homicide and criminal vehicular injury.

Family members of the victims wept quietly as the verdict was read about 10 p.m.

Over more than four days of testimony from crash experts and other witnesses, the jurors had been faced with one central question: Had Franco been driving the van that plowed into the bus on Feb. 19?

Even if they had determined that Franco wasn't behind the wheel and had acquitted her, she hadn't been expected to walk out of the courthouse. She still faces federal identity theft charges and was likely to be deported because authorities say she is in the country illegally. [Franco found guilty in Cottonwood school bus crash, Minneapolis Star Tribune, August 7, 2008]

In addition to the above-mentioned crimes, she was also charged with failure to stop at a stop sign, not having a valid driver's license, and providing a false name and date of birth to a police officer.

Shown below are the four children killed (left to right) Hunter Javens, 9, and his brother Jesse Javens, 13, both of Cottonwood; Emilee Olson, 9, of Cottonwood; and Reed Stevens, 12, of Marshall, MN. 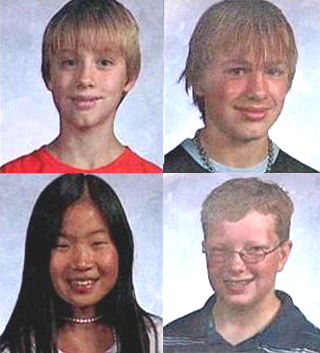