The National Journal has a cheerful article about the sociological characteristics of the official 11 million illegal residents, assuming we care about the details of foreign moochers.

However, the piece does contain some helpful statistics, particularly the following:

Who Are the 11 Million Undocumented Immigrants?, National Journal, January 29, 2013 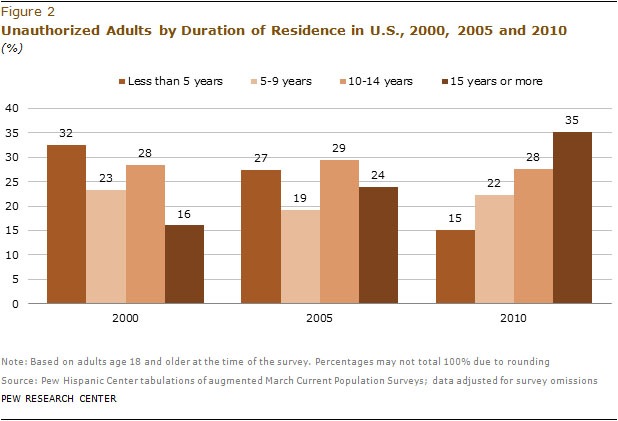 Amnesty enthusiasts often argue weakly that illegals have been here a long time so they should get legal work permits (immediately!) and trillions of dollars in benefits.

On the contrary, the fact that at least 6.9 million (63% of the official 11 million) have resided here longer than a decade shows how they have thrived without green cards and other legal niceties. Lawbreaking foreigners apparently get along just fine “in the shadows” otherwise more of them would go home.

Illegal immigration is a rational act, based on the foreigners’ notion that they will have a materially better life in the United States compared with their dirtbag homeland. And most do, as a result of readily available forged documents enabling them to steal American jobs, plus easily obtained free-to-them deluxe healthcare and other government benefits that multiply their often low wages.

Therefore the government should shelve plans for a massive amnesty that will only incentivize future lawbreaking. The illegals don’t need it, and the taxpayers will be much better off without mass legalization.