Illegal Aliens Get Another Freebie from King Obama 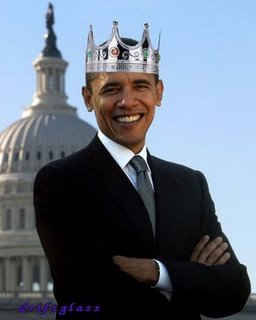 The President isn’t hiding his generosity toward illegal aliens. He may not launch his somewhat stealthy amnesty initiative right away because of spending battles with Congress, but he certainly doesn’t want his foreign supporters to think he has forgotten about them — not to worry!

Obama has used his mighty king-like powers to relieve lawbreaker foreigners of the requirement to spend time in their home countries to process return visas. Now claiming a family separation ends that necessity, and only a quickie visit is needed to get a visa stamped. Increased convenience for alien job thieves!

In another foreigner-friendly move, Obama’s DHS has mostly dismantled 287(g), the partnership of feds with local police to scan jails for already arrested illegal criminals — it was far too effective and the lawbreakers squawked up a storm about enforcement generally, even against stone-cold criminals. (Interestingly, 287(g) is being extended for a few more months in Prince William County, which has had some bad alien crimes.)

Democrats don’t care that much about public safety, because they believe violent criminals suffered childhoods with insufficient self-esteem, and it’s unfair to punish them.

Anyway, the latest action is another administrative reduction of sovereignty done by King Barack (like his criminal-friendly DREAM amnesty).

WASHINGTON — The Obama administration eased the way Wednesday for illegal immigrants who are immediate relatives of American citizens to apply for permanent residency, a change that could affect as many as 1 million of the estimated 11 million immigrants unlawfully in the U.S.

A new rule issued by the Department of Homeland Security aims to reduce the time illegal immigrants are separated from their American families while seeking legal status, immigration officials said.

Beginning March 4, when the changes go into effect, illegal immigrants who can demonstrate that time apart from an American spouse, child or parent would create “extreme hardship,” can start the application process for a legal visa without leaving the U.S.

Once approved, applicants would be required to leave the U.S. briefly in order to return to their native country and pick up their visa.

The change is the latest move by the administration to use its executive powers to revise immigration procedures without Congress passing a law. In August, the Obama administration launched a program to halt the deportation of young people brought to the U.S. unlawfully as children.

The new procedures could reduce a family’s time apart to one week in some cases, officials said. In recent years a few relatives of U.S. citizens have been killed in foreign countries while waiting for their applications to be resolved.

“The law is designed to avoid extreme hardship to U.S. citizens, which is precisely what this rule achieves,” said Alejandro Mayorkas, director of U.S. Citizenship and Immigration Services, in a statement. “The change will have a significant impact on American families by greatly reducing the time family members are separated from those they rely upon,” he said.

Until now, many immigrants who might seek legal status do not pursue it out of fear they will not receive a “hardship waiver” of strict U.S. immigration laws: An illegal immigrant who has overstayed a visa for more than six months is barred from reentering the U.S. for three years; those who overstay more than a year are barred for 10 years.

The new rule allows those relatives to apply for the waiver without first leaving the U.S.