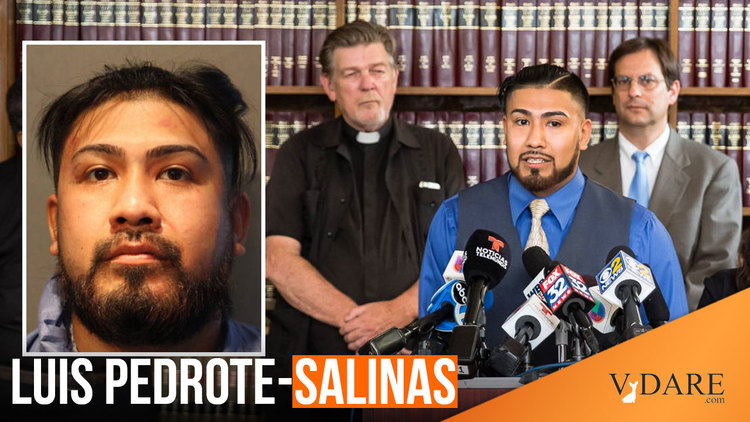 Luis Pedrote-Salinas, seen at a July news conference, is suing the Chicago Police Department for including him in a gang database, an inaccurate designation that he thinks cost him the chance for protection under the DACA program.

… Activists in Chicago claim these gang databases are doing more harm than good. Over time, Chicago’s list has grown to include almost 65,000 people whom the police consider gang-affiliated. More than 95 percent are African-American or Latino, and young activists say police are irresponsibly and disproportionately labeling young men of color as gang members. Immigrants, in particular, say the city’s list is full of errors and leading to some deportations.

Luis Pedrote-Salinas says this is exactly what happened to him seven years ago.

“They arrested me for an unopened Bud Light beer can,” he says. “And just because of that, they picked me up, and I was getting deported.”

Pedrote-Salinas is an undocumented immigrant from Mexico. He says he was getting into his car in a neighborhood that Chicago police were targeting for gang activity. They stopped him, spotted the beer can in his car and then arrested him. The case was never prosecuted, but that arrest has had long-lasting effects for Pedrote-Salinas.

“He said that I self-testified to be a Latin King. But I didn’t testify nothing,” he says.

Pedrote-Salinas says he is not in a gang, but in Chicago, there is no official process to get off the database. And for Pedrote-Salinas, the most frustrating thing is that he thinks being on the list killed his eligibility for Deferred Action for Childhood Arrivals policy that protects some migrants who were brought to the U.S. as children.

“We knew they denied me because of the gang allegations,” he says.

And departments could eventually be forced to dismantle their databases.

Martin says that is what happened to Minnesota’s statewide database several years ago. And more recently, the Portland, Ore., police department also discontinued its gang database over the same concerns.

And everything has been swell in Minnesota and Portland ever since.

But from CWBChicago.com this month:

Exclusive: Man who sued city for including him in “gang database” killed his neighbor last week, prosecutors say

One of four men who sued the city of Chicago for including them in the police department’s gang database murdered his next-door neighbor last week by shooting the victim at point-blank range in the forehead as he returned home from work, prosecutors say.

… Pedrote was added to the police department’s massive list of purported gang members after cops saw a can of Bud Light in his car during a traffic stop and then discovered that he had a tattoo that some Latin King gang members wear, he said at the time. In fact, Pedrote claimed, he simply liked the tattoo’s design. …

The lawsuit was settled late last year in exchange for $2,000 and a letter from CPD saying it cannot verify that Pedrote “is currently a ‘gang member’” as defined by state law, according to a preliminary settlement agreement filed in federal court.

On Sunday, prosecutors accused Pedrote of being a cold-blooded killer.

According to the allegations, 41-year-old Comcast contractor Francisco Zamora arrived home from work and parked his work truck behind his family’s home in the 6000 block of South Artesian around 4:22 p.m.

Zamora was preparing to walk into the house when Pedrote walked up and shot him in the forehead at close range, prosecutors said.