Last April, Maxey Ann Lynch (pictured) was killed by a drunk-driving illegal alien as she was doing her job of Richmond Times-Dispatch newspaper carrier. Her car was struck head-on by Guatemalan Santos Gabriel-Tomas driving the wrong direction, and she died later in the hospital.

Not only was his blood-alcohol content 0.19 percent (more than twice the legal limit), he also had no license to drive due to his illegal alien status.

Worse, this crime was entirely preventable because Gabriel-Tomas had been convicted in March 2012 of drunk driving, but was not deported. In a nation that cared about public safety, drunk-driving illegal aliens would be deported as a matter of law, but that is not the case here.

Now-retired Congresswoman Sue Myrick worked for years to pass the Scott Gardner Act, but with no success. As she said, the bill required, “You’re drunk, you’re driving, you’re illegal, you’re deported, period.” In 2012 Senator Chuck Grassley proposed a three-strikes requirement that would have meant deportation after three DUI arrests. However, that law would not have saved Sister Denice Mosier from a two-timer nor young Matthew Denice either.

Below, Santos Gabriel-Tomas was previously arrested but not deported. 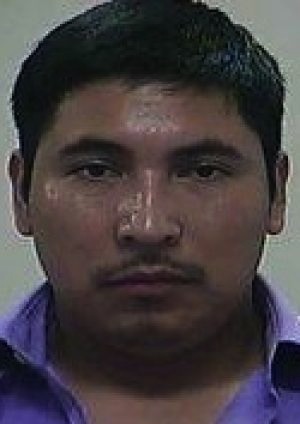 An intoxicated, wrong-way driver who pleaded guilty to the killing in April of a Richmond Times-Dispatch newspaper carrier in South Hill had been convicted of DUI a year earlier and had never been licensed to drive in Virginia.

Santos Gabriel-Tomas, 30, an immigrant from Guatemala in the country illegally, was convicted in March 2012 of driving under the influence of alcohol in neighboring Lunenburg County. He had never acquired a license to drive, but a judge in the earlier case revoked his privileges to obtain a license for 12 months as part of his punishment, Mecklenburg County Deputy Commonwealth’s Attorney Allen Nash said.

After the suspension period passed, Gabriel-Tomas continued to drive without a license and was doing so when he crashed head-on April 7 into a car being driven by longtime Times-Dispatch carrier Maxey Ann Lynch, 61, who later died at VCU Medical Center.

Gabriel-Tomas was driving the wrong way on U.S. 58 in South Hill and had a blood-alcohol content of 0.19 percent — more than twice the legal limit.

Ahead of his scheduled jury trial next Wednesday, Gabriel-Tomas pleaded no contest Friday to charges of aggravated DUI manslaughter, DUI second offense and driving without an operator’s license. Pleading no contest is tantamount to pleading guilty.

“He entered a guilty plea, straight up, with no (plea) agreement,” Nash said.

The tragic circumstances unfolded early April 7 as Lynch, a carrier for 13 years, had just started her newspaper route. She had completed a delivery at a McDonalds and was heading east on U.S. 58 in her 1999 Ford Escort.

Her husband, Levi C. Lynch, who was also delivering papers that Sunday on a separate route, had spotted the wrong-way driver but didn’t report it when he passed a deputy sheriff in an unmarked car. Lynch believed the officer would see the errant driver and stop him.

As it turned out, Mecklenburg sheriff’s deputy Rusty Gordon, while on patrol, did spot the driver and immediately tried to initiate a traffic stop.

But the deputy couldn’t get there in time.

“As he pulled even with the vehicle, he observed the crash actually happen,” Nash said. “Both vehicles were absolutely totaled and destroyed.”

The 2:18 a.m. crash took place just inside the town limits on a stretch where the roadway is four lanes separated by a median. The speed limit in that area is 40 mph.

South Hill police officer Ryan Durham responded to the scene with paramedics, and Lynch was airlifted to VCU Medical Center. Durham approached Gabriel-Tomas, who was slightly injured, and administered several field sobriety tests — all of which he failed, Nash said.

Gabriel-Tomas, who lived in Kenbridge, told the officer he had been driving from a friend’s house and had consumed three beers. Gabriel-Tomas complained of some pain and was examined at Community Memorial Health Center before being taken to jail.

The results of a blood draw at the hospital revealed Gabriel-Tomas had a blood-alcohol content of 0.19 percent.

Lynch’s husband didn’t learn of her crash until getting a call about four hours later from VCU Medical Center. He said the hospital didn’t provide details, so Lynch quickly completed his route and headed to Richmond about 7 a.m. Upon arriving, he was met by a hospital chaplain who informed him of his wife’s death.

After learning of Gabriel-Tomas’ previous DUI conviction, Mecklenburg prosecutors obtained indictments that increased the charges to aggravated DUI manslaughter and second offense DUI. He faces a prison term of one to 20 years on the manslaughter offense alone.