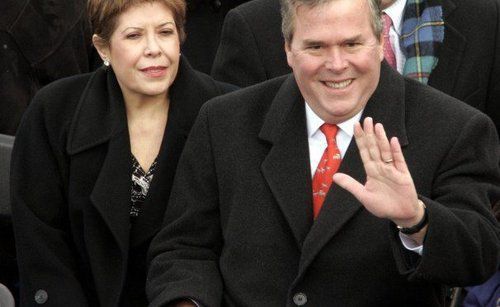 If Columba Bush Can't Converse in English, Was Her Naturalization Fraudulent?

Jeb Bush famously carries on domestic life in his own home in Spanish, and presumably intends to do the same in the White House.

That raises the subtle question of whether Jeb is doing this out of preference or necessity.

Does the would-be First Lady, Columba Bush, even functionally speak English? Nobody has yet found a video online of Columba Bush conversing in English, although, of course, one could turn up.

Update: I’ve found a 2003 C-SPAN video (22:20) of Mrs. Bush reading a two-minute speech on drug addiction in English. Her accent is fairly understated, but she’s hard to understand because she doesn’t put the stresses at the appropriate points. She does not answer questions on the video. I could probably read off a speech written in Spanish right now about 80% as well as she did with a speech written in English with practice.

We are told the lack of video of her conversing in English is because she doesn’t want to have anything to do with politics. But here’s a campaign commercial she recorded for her husband in Spanish:

Or, we are informed, the lack of video of the wife of one of America’s most prominent politicians over the last 17 years speaking the national language is due to Columba’s alleged extreme shyness, but here’s a video of her conversing graciously in Spanish:

So, we are clearly being misled about Columba being so shy and averse to politics.

Jeb’s wife Columba was naturalized a U.S. citizen in 1979, according to Wikipedia, or in 1988, according to an interview she gave on Olvera Street to Los Angeles Times reporter Michael Quintanilla in 1991:

Honoring the Family Name : * Culture: ‘I’m not interested in politics,’ says Columba Bush, the President’s daughter-in-law. Still, she knows how to campaign for a cause: her native Mexico. July 31, 1991|MICHAEL QUINTANILLA | TIMES STAFF WRITER

… Columba Bush, 37, the Mexican-born daughter-in-law of the President of the United States, is touring the country to talk about her role as co-founder of the Children’s Cultural Education Fund of the Ballet Folklorico de Mexico. …

It was 1988, during the height of the presidential campaign, and her estranged father, looking to exploit his daughter’s name, had just made the tabloids in Mexico and the United States. …

Bush decided to continue campaigning, especially in Latino communities, where her presence and bilingual skills were highly valued. Later that year, at the Republican National Convention, she took the podium to second her father-in-law’s nomination. She had prayed to the Virgin of San Juan for strength. After much prayer and thought, she would give up her Mexican citizenship to vote for George Bush.

“That was a difficult decision to make because up until then I didn’t see any necessity to change my citizenship. My husband wanted me to stay as a Mexican citizen, and the whole family has always respected my decision. I changed my citizenship to vote for my father-in-law.”

Quintanilla’s article doesn’t mention whether he conducted the interview with Columba in English or Spanish.

I’ve tracked down the CSPAN video of Columba seconding her father-in-law’s nomination at the 1988 Republican National Convention. It shows her orating from the crowded floor of the convention on national TV in Spanish.

And here’s a 1988 campaign commercial Columba filmed with George H.W. Bush. Columba speaks in Spanish and her father-in-law speaks in English.

So I think we can dismiss the canards that she’s cripplingly shy and utterly averse to politics.

As a fallback, she is said to be shy about speaking in English because she doesn’t speak English well. But what evidence is there that she even speaks conversational English, at least up to any reasonable minimum standard?

This question has an interesting legal implication.

The government’s current naturalization requirements for spouses of U.S. citizens include:

Be able to read, write, and speak English and have knowledge and an understanding of U.S. history and government (also known as civics)

The law was likely quite similar in 1979, although I don’t know for sure. Presumably, Columba spoke even less English in 1979 than she does now.

Even assuming that Columba’s naturalization wasn’t fraudulent due to her meeting some minimal standard for conversing in English, it would be interesting and informative to have a public discussion of just how little English is required to meet this hurdle.

And what does this say about “rule of law” when it comes to immigration?