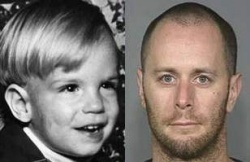 As an illegal alien who entered lawfully with a student visa, Krastev needed a legal ID when he dropped out of college and lost his legal status.

The Bulgarian must have thought it was a cool idea to steal the identity of Jason Evers, a three-year-old boy who was killed during a 1982 kidnap attempt, something he read in a newspaper. The kid had no more use for his Social Security number, Krastev probably thought, and believed his need entitled him to take it.

However, the Evers family did not take lightly the theft of their boy’s name, and were deeply disturbed to have the old wounds torn open again years after the terrible crime. During the trial, they traveled to Portland to put a face on identity theft.

Below, Bob and Amy Evers, Jason’s father and sister, talked with the press during the Krastev trial. 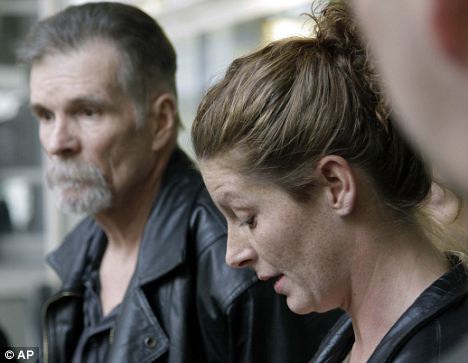 “My heart has been crushed,” said Amy Evers, older sister of the 3-year-old boy who was kidnapped and killed in 1982 near their Ohio home. “You hurt my family because of your selfishness.”

Earlier in the hearing, she had walked out of the courtroom during a video prepared by Krastev’s defense team. It featured his parents, his grandmothers, his younger brother, his dentist, his fiancée, chess and tennis partners, former co-workers at the liquor commission and many others talking about his good character.

Some of them used the name “Jason” when talking about their friend. It was a little too much for Amy Evers and she left.

Later, when it was her turn to speak, she let Krastev have it.

“It hurts me when I hear people call you Jason Evers,” she said, shooting Krastev a glare. He sat at the defense table, wide-eyed, a cheek balanced on his fist. “You,” she said, “are not Jason Evers!”

That was then. Now Krastev has done his time and will hopefully be deported ASAP.

Bulgarian who used boy’s ID getting out of prison, Associated Press, January 24, 2012

BEND, Ore. — A Bulgarian man who assumed the identity of a murdered Ohio boy and became an Oregon liquor enforcement agent is getting out of prison and being handed over to immigration officials for procedures that could lead to his deportation.

Doitchin Krastev was expected to be released Tuesday from federal prison in California into the custody of U.S. immigration officials, The Bend Bulletin reported.

He pleaded guilty in 2010 to passport fraud and identity theft and apologized to the family of Jason Robert Evers, who was killed at age 3 in a 1982 kidnapping attempt.

Krastev wasn’t linked to the killing. He came to the United States for an education in the 1990s, dropped out of college and then took over Evers’ identity.

He was caught because he applied for a passport, and the State Department had begun checking applications against death records.

Virginia Kice, a spokeswoman for the U.S. Immigration and Customs Enforcement agency, said Tuesday that she was trying to confirm that the transfer had occurred as scheduled.

After Krastev was arrested and made a plea deal, deportation proceedings were expected. His lawyer said he hoped to rebuild his life in Bulgaria with an American fiancee.

Kice said immigration authorities would interview Krastev and review the case before deciding on what step to take next, such as asking that he be deported.

Krastev was a child and living in Bulgaria, the son of respected scholars, when Evers was killed.

A U.S. official who befriended the family took in Krastev, who graduated from a U.S. high school and earned a scholarship to Davidson College in Charlotte, N.C. But he did poorly, dropped out, and, facing the possibility of returning to Bulgaria, disappeared.

Investigators and journalists found he spent years in Colorado before moving to Oregon and, using Evers’ name, passing a background check for a job in central and eastern Oregon with Oregon Liquor Control Commission.