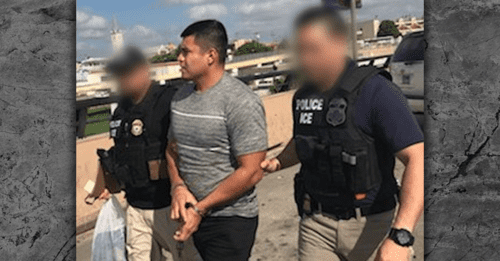 A Mexican man, wanted in his home country for allegedly committing multiple homicides, was turned over to Mexican authorities Wednesday by deportation officers with U.S. Immigration and Customs Enforcement’s (ICE) Enforcement and Removal Operations (ERO).

Jose Yobani Hernandez-Sanches, also known as Jose Antonio Hernandez-Rangel, 26, was illegally present in the United States. He is accused of multiple homicides that occurred in and around Piedras Negras, Coahuila de Zaragoza, Mexico. Hernandez-Sanches, was escorted by ICE officers to the U.S.-Mexico border at Laredo, Texas, and transferred to Mexican authorities Sept. 26.

“Hernandez-Sanches will now face justice in Mexico for his alleged involvement in multiple homicides,” said Daniel Bible, field office director for ERO San Antonio. “Our ICE office works closely with our foreign law enforcement partners to repatriate fugitives who enter the Unites States to escape justice for crimes committed in their home countries.”

On Oct. 3, 2017, Hernandez-Sanches was one of 10 individuals arrested by the Government of Mexico on the homicide charges. However, records indicate that Hernandez-Sanches managed to escape and later fled to the United States.

On Nov. 11, 2017, Hernandez-Sanches illegally entered the United States near Del Rio, Texas, and was arrested by immigration officials. On Nov. 14, 2017, he was convicted in a Texas federal court of illegally entering the U.S. and was sentenced to 90 days in prison. On Feb. 8, 2018, after his release from federal prison, he was released to ICE custody where he remained until his removal.

Since Oct. 1, 2009, ERO has removed more than 1,700 foreign fugitives from the United States who were sought in their native countries for serious crimes, including kidnapping, rape and murder.  ICE removed or returned 226,119 aliens in fiscal year 2017. The proportion of FY17 removals resulting from ICE arrests increased by nearly 10 percent over the previous fiscal year, and the number of ICE interior removals in FY17 increased by over 15,000 from FY16.