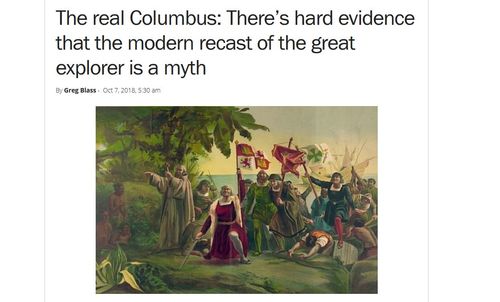 A Defense Of Columbus From Academia

As America continues to be deconstructed, Christopher Columbus has been transformed in the popular imagination from a great hero into the prototypical Evil White Man that is responsible for all suffering throughout history. However, the new popular myth about Columbus may just be a "bum rap."

Can a case be made — a convincing and well-documented case at that — proving that this now trendy, revised history of Columbus is where the myth really lies?...

Enter the scholarly work of a professor emerita at Stanford University, Carol Delaney, a cultural anthropologist with degrees from Harvard and the University of Chicago. She is also a research fellow at Brown University. Her riveting book, “Columbus and the Quest for Jerusalem,” was actually published in 2012, but has gained little in the way of promotion even by its publisher, Simon & Schuster, who are as politically correct about the issue as some school boards. The book’s impeccable scholarship is rarely cited. Why would that be?

Given the now-popular debunking of the historical narrative of Columbus as a hero, is it possible no one wants to acknowledge contrary evidence from solid sources — so solid that it debunks the debunking?...

When Columbus took this bold voyage, contrary to the myth that smears him today, he befriended the native people, traded with them, respectfully interacted with them and led his crews to do the same. He also formed a close relationship with their chief, whose son became their interpreter. Columbus later took the chief’s son and five other tribe members as guests — not slaves in chains as some would have us believe — on his emergency return back to Spain to replace his lost ships. Those lost ships caused him to leave 46 of his crew behind on the island of Hispaniola with clear written, recorded orders: continue to treat the indigenous people well.

It was his crew who disobeyed Columbus’s strict orders, who pillaged and raped their way around the island in his absence, sealing their own fate. Meanwhile, Columbus spent considerable time in Spain, replacing his lost ships. He proudly introduced the six members of the tribe at court to Isabella and King Ferdinand, who proclaimed themselves the godparents of the chief’s son, a significant honor.

Upon his anxious return to the New World, Columbus found all his marooned crew dead, killed for their misdeeds at the hands of their intended Native American victims. The chief and his tribe welcomed Columbus back, and Columbus wrote with palpable remorse of what the chief reported of the crew members’ atrocities.

[The real Columbus: There's hard evidfence that the modern recast of the great explorer is a myth, by Greg Blass, Riverhead Local, October 7, 2018]

I'm going to check out the book myself. Of course, in a broader sense, the specifics don't really matter. Even if Columbus treated the natives with respect, his discovery sparked the European migration to the New World, which we are now told is a Bad Thing. Needless to say, none of those lecturing us about this are willing to give up their own homes and property.

What's more, if Columbus's migration was part of an effort to relaunch the Crusades, that would make him even more evil in the eyes of today's establishment. The war against Columbus is a war against Western Man; which is to say, a war against the historic American nation. But it's worth learning more about the Admiral of the Ocean Seas so we know exactly what we are defending in this existential cultural conflict.