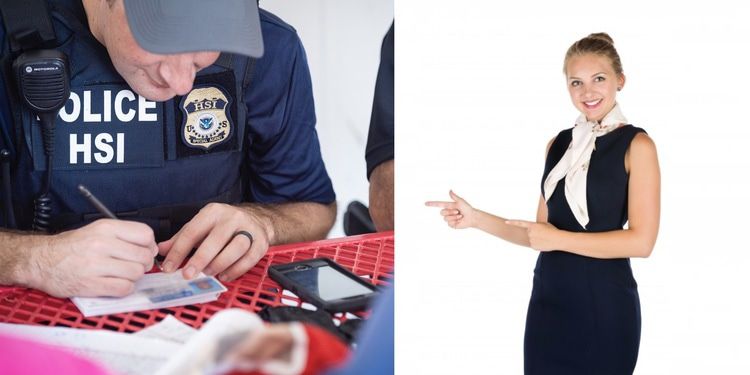 ICE Air Ships Invaders Home for Free: “We’ll Be Back Here In A Month”

Deportations aren’t horror shows, as Sunday’s Washington Post described in a front-page article. Foreigners are apparently happy to return to their countries even though the circumstances may not be the best. However, the price is right for passengers when the US taxpayer picks up the tab.

But, as one deportee remarked, “We’ll all be back there in a month.”

Below, ICE Air provides a free trip back to invaders’ own nations. 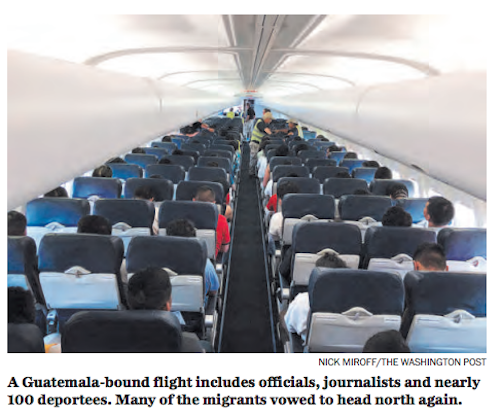 As the Post correctly points out, the numbers are negative for defenders of borders and sovereignty: The foreigners flowing across the open borders by far outnumber those being deported. Real punishment would change lawbreaking behavior, but that won’t happen in bought-and-paid-for Washington, which serves the wealthy open-borders lobby.

GUATEMALA CITY — About 45 minutes before descent, the guards went up and down the aisle unshackling the passengers, and the mood in the cabin began to lighten. A mother with a boy near the front was still crying, but they were the only family aboard the flight. Nearly all the other 93 deportees were men, and they began joking and talking excitedly.

“You see? They’re smiling!” said Matt Albence, the acting director of U.S. Immigration and Customs Enforcement, who spends a great deal of time defending his agency’s core functions, including this: a one-way trip out of the United States on ICE Air. “This is probably better than some of the commercial flights I fly on.”

It was Albence’s first visit to Guatemala, the country that has surpassed Mexico as the largest source of unauthorized migration to the United States. ICE Air, the agency’s charter airline, was bringing two planeloads of people to Guatemala on Thursday. The Trump administration has big plans to increase that.

President Trump has pledged to expel “millions” of immigration violators, a goal that wildly exceeds the government’s abilities and the seating capacity of its aging 737s. The reality is that Trump is losing on the ground: Since the start of the 2019 fiscal year in October, ICE has deported about 50,000 Guatemalans, but nearly five times as many illegally crossed the border into the United States during that time, leading to a record influx of families and children.

In its efforts to deter Central American migrants, the Trump administration reached an accord with the Guatemalan government last month that will allow the United States to begin sending planeloads of Honduran and Salvadoran asylum seekers here, in addition to Guatemalan deportees. The country has a presidential runoff vote Sunday, and both candidates have criticized the deal, which will require approval by Guatemala’s congress. Trump has threatened to wreck the struggling nation’s economy with tariffs and taxes if he is not appeased.

ICE sends about nine flights per week to Guatemala. Its government has agreed to accept up to 20, with 135 passengers each, potentially turning the country into a kind of reverse Ellis Island — a repository, far from the U.S. border, for those the United States has rejected.

Albence, a longtime ICE official, said he wanted to see the process firsthand, and he had never been to Central America’s Northern Triangle region. The day before, ICE had raided seven poultry and food plants in Mississippi, arresting 680 workers, the agency’s largest workplace sting in more than a decade. Nearly 400 of those arrested are from Guatemala.

Despite the scenes of anguished children without their parents in Mississippi, Albence called it a “textbook operation.” No one was injured, and nothing had leaked out in advance. Authorities said many families were reunited once parents were processed and issued court summonses. But some children were left alone, and ICE did not coordinate with state and local child-welfare providers.

“Our job is to enforce the law,” said Albence, who is popular at the White House and within his agency for his tough-cop demeanor and uncomplicated, unsentimental view of the job. “It’s up to Congress to make the laws or change the laws.” (Continues)