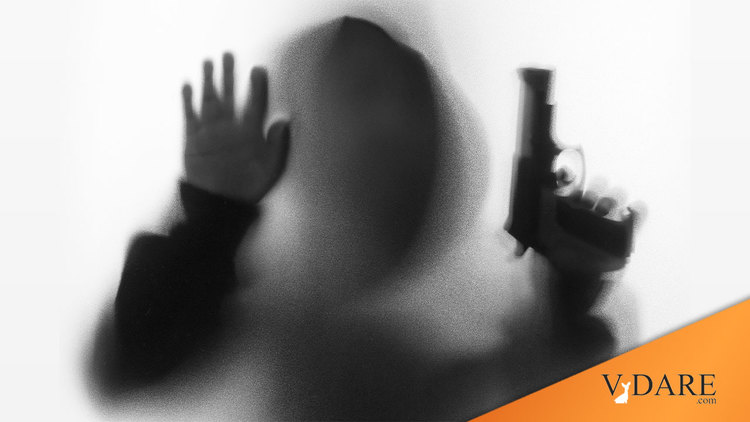 I'm Eccentric, You're Weird, He's Crazy—What, If Anything, Can We Do About Crazies?

Another week, another crazy shooting, and much chatter about mental health.

Last weekend's Radio Derb (here, here, and on iTunes) had a go at the topic in reference to the Connecticut school shootings.  Extract:

The second sidebar issue here, much commented on in the past few days, is the identification and treatment of mad people.

That's the common narrative. There's a case to be made for it. Certainly there are people on the streets of New York who ought to be under institutional care. Heck, I'll name one for you: Naeem Davis, the guy who threw a New Yorker to his death under a subway train December 3rd.

Identifying dangerously crazy people before they do outrageouly crazy things is a hit-and-miss business, though. We weren't any better at it in the age of institutionalization than we are now. The worst massacre of elementary-school children in all of U.S. history was not the one in Connecticut last Friday, it was the school bombings in Bath Township, Michigan that killed 38 kids and six adults. That was in 1927. I'm sure that at the time the Michigan bomber was cooking up his murderous plan in freedom, there were thousands of harmless people locked up in that state's asylums.

Or think of Charles Whitman, who went up the tower at the University of Texas Austin campus in 1966 and murdered 14 people. That was in the age of institutionalization, though towards the end of it, and Whitman was in fact taking prescription psychoactive medication at the time.

I return here to my opening remarks about this being a zone of chaos, in which seeking for rhyme or reason in the event is futile. I don't mean that it's inherently futile, or will always be futile: but it's futile right now because we don't yet understand enough about human nature.

The way our minds are constructed, we are always driven to seek rhymes and reasons for things. We weren't very good at this, though, until historically quite recently — until scientific method came up in the 17th century. Seeking rhyme and reason for earthquakes, our pre-scientific ancestors came up with folk explanations involving angry gods, restless dragons, and such. We now know that those folk explanations are false. Earthquakes are caused by convection flows in our planet's molten interior causing cracking and shifting of the solid crust.

Perhaps one day we'll know why crazy people do crazy things, and how to identify those people accurately. Perhaps we'll be able to stop the crazy things, though that doesn't necessarily follow: we understand earthquakes, but we can't stop them. Still, understanding would be nice.

We don't have it yet, though. Our understanding of the mind is not far beyond the angry gods and restless dragons stage.

I don't have much patience with explanatory thinking at the folk level; I want to see hard, reproducible scientific results. Until they come along, I'll hold on tight to my liberties. Without science, we only have pseudoscience: and pseudoscience has always been close friends with tyranny.