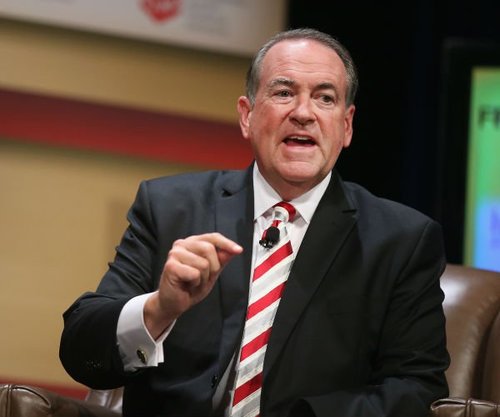 Governor Mike Huckabee, seeing where the political winds are blowing, is trying to act tough on immigration.

The U.S. border with Mexico would be secured within a year if Mike Huckabee is elected president, the former Arkansas governor told Newsmax TV on Thursday.

"Seal the border," the Republican candidate told "Newsmax Prime" host J.D. Hayworth. "We can do that — and we certainly can do it in less than a year."

He referenced the Alaska Highway, built during World War II between the United States and Canada. Democratic President Franklin Roosevelt touted the $30 million project as a way to quickly reinforce America in a foreign crisis.

Construction began in March 1942 and ended that October.

"Seventy-three years ago, we built a road between British Columbia and Alaska," Huckabee told Hayworth. "A 1,700-mile road in some of the most difficult terrain and difficult weather conditions on Earth — and we did it in less than a year, and that was with the engineering capability of 73 years ago...

[Mike Huckabee: I will secure border within a year if elected, by Todd Beamon, Newsmax, July 30, 2015]

Huckabee touches here on a simple truth. The argument that we simply "can't" build an effective border security fence is completely insane. Other countries, such as Hungary, are building them as we speak. Israel has already built an effective border security fence. (And, wouldn't you know it, many of the same people telling us that America shouldn't do anything about mass immigration are enthusiastic advocates of a fence in Israel.)

The problem is that Huckabee has a poor record on this issue. True, he did take the Numbers USA pledge in 2008. But he's also expressed a distinctly ethnomasochistic take on mass immigration in the past.

Of course, people change over time. Perhaps Huckabee has seen the light. But he has a bad habit of saying he will restrict immigration and then flip-flopping. It's not that Huckabee is wrong about the fence. It's just hard to see that he will be the one to actually build it.