"How Trump Rose to Power:" It's the Immigration, Stupid

How Trump Rose to Power

The billionaire consistently beat out his Republican opponents in the U.S. presidential race among the voters who matter.

Okay, but the lengthy text analyzing the reasons behind Trump’s surprise victory doesn’t include the text string “immigra” …

On the other hand, the article’s own graph is clear on the immigration issue’s priority: 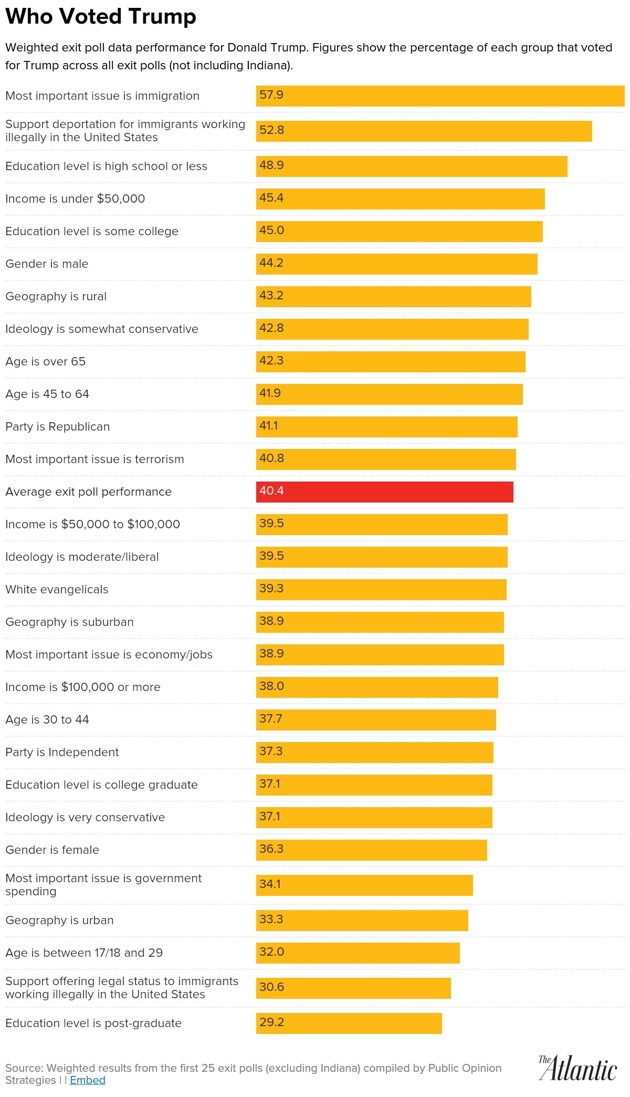 Brownstein does offer some good analysis of just how broad the Trump coalition is:

Donald Trump has emerged as the presumptive Republican U.S. presidential nominee by assembling a coalition that proved remarkably consistent across geographic lines—and ultimately showed more breadth than any of his rivals.

From the primary campaign’s beginning to its effective end Tuesday night, Trump’s core strength remained his overwhelming advantage among several big groups in the GOP electorate, particularly whites without a college education and men.

But Trump also displayed more ability to reach across the party than any of his rivals, particularly in the weeks after his early April defeat in Wisconsin. In one telling contrast, Trump consistently fared much better among evangelical Christians—who Ted Cruz considered the foundation of his coalition—than Cruz did among voters who are not evangelicals. Over the past month, Trump has posted his best performances not only among the groups that preferred him from the outset, but many of those that had resisted him, including college graduates and women.

So, let me throw this idea out there: the lesson we’ve learned so far in 2016 is not that immigration is a divisive issue for Republicans. Instead, Trump’s Americans First policy on immigration has been a unifying issue for the GOP, healing over long-standing breaches within the party.

Trump will soon be told and over that his Americans First approach to immigration policy is too divisive for the general election. Maybe so … Or maybe it’s his best hope of unifying a majority of the electorate.

You know, “Americans First” does make a certain amount of sense to American voters. This idea strikes me as pretty sensible: that there are a lot of things Americans disagree over, but one thing we can agree upon is that we Americans are in this together and we need to work out our issues with each other, not try to stab our fellow Americans in the back by importing ringers from other countries. Of course, I am a wacko extremist who doesn’t believe in the Establishment wisdom of Invade the World / Invite the World, so don’t pay any attention to my unhinged rantings.

But just maybe, news helicopter footage of rioting illegal aliens trashing the cars of terrified American citizens attempting to participate in the democratic process will not be bad for Trump, as the conventional wisdom assumes. Instead, video of leftist mobs rioting for their right to continue to break the law with impunity just might be bad for Hillary.