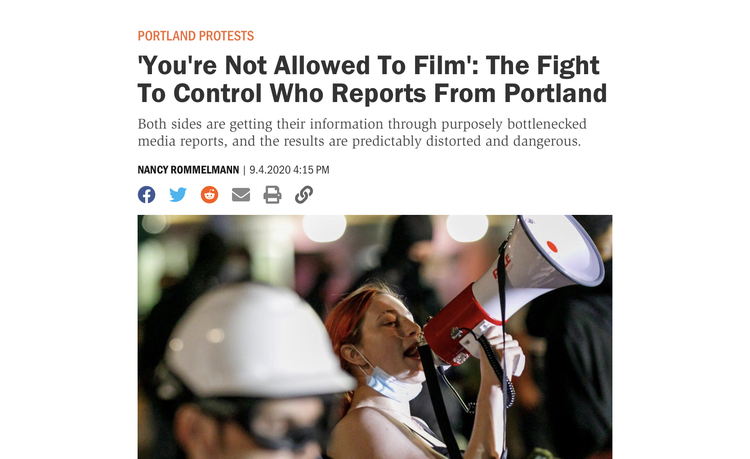 How the Portland Riots Are Spun as Peaceful Protests

If you only follow the Portland riots online, you can see a lot of footage like this:

Graphic: #Antifa rioters throw a Molotov cocktail in direction of police in SE Portland. It lands next to people, setting one on fire. Video by @TaylerUSA. #PortlandRiots pic.twitter.com/NJfEURKfkC

But if instead you watch non-Fox national network news, you evidently get 99 and 44/100ths Peaceful Protestors being brutalized by fascists.

How the sausage is made:

‘You’re Not Allowed To Film’: The Fight To Control Who Reports From Portland

Both sides are getting their information through purposely bottlenecked media reports, and the results are predictably distorted and dangerous.
NANCY ROMMELMANN | 9.4.2020 4:15 PM

“YOU’RE NOT ALLOWED TO FILM!” is a cry you hear incessantly at protests in Portland, Oregon, always shouted at close range to your face by after-dark demonstrators. …

I cannot say who came up with these anti-camera battle cries. But it’s easy to understand why protesters use them: to shape the narrative the country sees about the protests. And that narrative, in my estimation after many weeks covering street clashes in a city where I lived for 15 years, is 90 percent bullshit.

… The IPC is an organized group in league with the activists, and it is usually their footage you see streamed online and recycled on the news: mostly innocent protestors being harassed and beaten by police.

… With the PRESS crew recording part of the story and the “YOU’RE NOT ALLOWED TO FILM!” crew harassing other journalists, the result can be a misleading view of the protests. It’s a revolution via the cellphone video they allow you to see.

The IPC and other documentarians who are deemed sympathetic to the activists’ cause agree on certain principles. You do not show activists’ faces. You only show activists in a defensive position: responding to, rather than inciting, violence. You enhance what can appear to be police brutality, e.g., activists defending themselves with homemade shields, often bearing the anarchist circle-A, against police. …

Reporters seen as not sufficiently sympathetic to the cause—which is defined by the Ten Demands for Justice, and includes most notably the abolition of the police—will be followed, be harassed, have their notes photographed and their phones blocked or stolen. (All these things have happened to me in the last month. A photographer friend has been repeatedly doxxed and placed on a list of “enemies.”)

If you forget any of these rules, you can just refer to the handy Google spreadsheet of approved journalists and suggested behavior. The spreadsheet contains names, Twitter handles, and ways to financially support the journos who make the cut.

Note who the people on this activist-approved list are writing for. Sergio Olmos, who made IPC’s list of approved journalists, is freelancing as a man on the ground for The New York Times. …