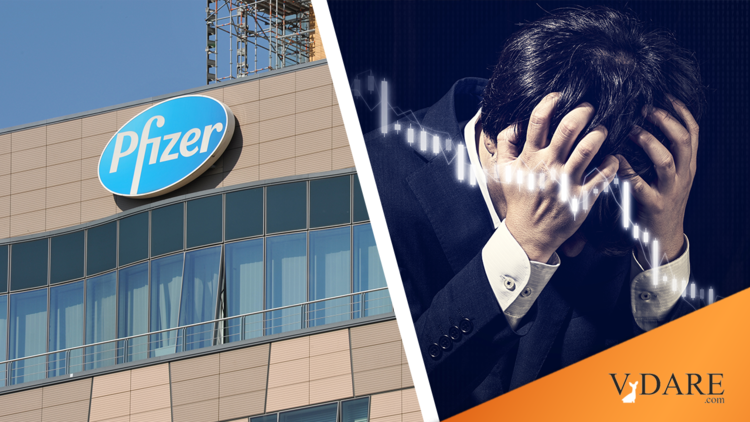 How Much Money Did Some Investors Lose Because Pfizer Didn't Report Its Vaccine's Success Until After The Election?

Earlier: Why Did Pfizer And FDA Agree To Not Release The News Of The Vaccine's Success In October As The Original Protocol Would Have Required?

Here’s some more interesting background on Pfizer-BioNTech’s October decision to shut down processing of nasal swabs in its vaccine trial until, in effect, after the election, which I wrote about in my new Taki’s Magazine column.

Wall Street stock analysts who had closely read Pfizer’s clinical protocol game plan and had been conversing with Pfizer’s executives were expecting at least the first interim analysis (planned for whenever volunteers had suffered 32 cases of COVID) and perhaps the second (at the 62 case point) in October. When those interim analyses were not released by late October, two analysts issued warnings that the vaccine was evidently in trouble and the stocks dropped.

BioNTech SE (NASDAQ: BNTX), Pfizer (NYSE: PFE) shares are on watch as Bernstein analyst Vincent Chen MD discussed on CNBC that the delay in the COVID-19 vaccine trial results from the partners could suggest poor results.

Chen noted that Pfizer management said in the past that they would expect to know in October if their Covid vaccine works. Chen highlights that we are now in the last week of October, with still no data announced.

In an earlier note to clients, Chen said they estimate Pfizer / BioNTech likely have two interim analyses in October, one likely mid-October, another likely late-October.

“We’re now well past when we would have expected the first analysis to occur,” Chen said. “This raises concern that maybe the 1st interim missed. If true, this would be an incremental datapoint pointing to lower vaccine efficacy.”

Another biotech analyst is sending out an SOS about the timing delay of Pfizer’s (NYSE: PFE)/BioNTech’s (NASDAQ: BNTX) trial readout for its leading COVID-19 vaccine. Yesterday, Bernstein’s Vincent Chen MD broached the subject.

Morgan Stanley’s David Risinger believes the first interim analysis passed (expected between Oct .8-15) with no announcement and the second interim analysis was expected Oct. 17–27, which is today. Pfizer didn’t announce an update with earnings this morning, so it is possible they will miss these dates. Risinger notes there may be a few days between the occurrence of the trigger and a press release of positive results, so an announcement is not completely off the table.

The analyst highlights that Pfizer management has repeatedly expressed optimism about potential vaccine efficacy success in October, and they think management may have been assuming >68% efficacy by the second interim analysis.

Risinger said vaccine efficacy will likely be lower if this week passes without a conclusive positive result.

Well, as it turned out, the Wall Street analysts were too pessimistic because they weren’t cynical enough about the games Pfizer was playing. Instead, Pfizer stock went up sharply on Monday when the stunning news (over 90% effectiveness) was finally released and the Pfizer CEO sold $5.6 million worth of his shares in his firm at a nice $41.94.

(And good for him. While huge Pfizer didn’t invent this vaccine, they made a smart deal with its inventor, the smaller German firm BioNTech, to provide the muscle to get this trial done fast and to market perhaps this year. Pfizer has already manufactured a few million doses.)

But the details of what Pfizer did to not have to follow their protocol, which apparently would have required them to report the success of their vaccine before the election, are pretty amusing. Science magazine has a long article Wednesday attempting to refute suggestions by Matthew Herper of StatNews and myself that Pfizer likely would have publicly reported the success of its vaccine if it had followed its own published plan. But if you read the Science article carefully, you might come to a different conclusion.

Unsupported political accusations have tainted the apparent good news about the development of an effective COVID-19 vaccine by two companies.

In the wake of the dramatic news of a potentially effective COVID-19 vaccine, President Donald Trump posted a flurry of tweets that claimed its makers, the U.S. Food and Drug Administration (FDA), and Democrats had conspired to suppress the announcement until after the 3 November presidential election. The U.S. company involved, Pfizer, “didn’t have the courage to do it before,” Trump asserted on 9 November. And FDA and Democrats, he wrote, “didn’t want to have me get a Vaccine WIN, prior to the election, so instead it came out five days later.”

Initially, Pfizer and its German partner BioNTech suggested they might have preliminary trial results by late October—a timetable Pfizer’s CEO, Albert Bourla, projected as recently as 29 September. The timeline was based on a plan that called for an outside panel to take a first look at the efficacy data for the vaccine when a total of 32 cases of COVID-19 had accumulated in the vaccine and placebo groups. But the companies and FDA later agreed on a protocol change that nearly doubled that number and delayed that review.

There is no evidence, however, that the decision had anything to do with presidential politics.

After all, it’s not like presidential politics were much in the news in October 2020 or that many interested and influential parties were up in arms over anything that might help the re-election campaign of Donald Trump (a.k.a., Literally Hitler).

And the companies flat out reject at Trump’s claims. “What people believe is their business,” Kathrin Jansen, who heads vaccine R&D at Pfizer, told ScienceInsider. “Quite frankly, we had no time and still have no time to deal with politics. We are at this 24/7, thousands of people working diligently to make this work. And for us, it was never about politics, it was always about just the disaster that we were in the middle of, all of us globally, seeing the devastation and the deaths.”

But if you read on, it turns out that after Pfizer decided to not fulfill its protocol, it wasn’t at this 24/7 anymore. In fact, it put the nasal swabs that were coming in from test volunteers for confirmation of coronavirus infection in storage until the presidential campaign was over. Science goes on:

When the companies submitted their request for a protocol change, they had yet to accumulate 32 cases. If they had 32 cases before the change was approved, the protocol would have required them to report the results to FDA. In addition, if the results could impact the way investors traded company stock, they may also have been required by the U.S. Securities and Exchange Commission (SEC) to make the results public. They decided to store the nasal swabs taken from participants who had suspected SARS-CoV-2 infections: If they didn’t test the swabs, they couldn’t confirm cases and therefore would avoid a protocol violation.

They stopped the count.

It also means that if Pfizer had held to the original plan, the data would likely have been available in October, as its CEO, Albert Bourla, had initially predicted.

Pfizer no doubt has the best legal advice that money can buy. So even though anybody can see through this transparent ploy, which seems like something out of a 1980s Chicago election count, they will probably get away with it because their lawyers likely found precedents of other firms doing something similar and getting away with it.

And when they made this decision to (literally) put the evidence on ice, the polls showed Joe Biden up by a mile. So how much trouble were they going to get into with the Biden Administration SEC over not reporting to investors that they had come up with a dodgy reason not to report to investors until after the election? Biden was going to win by a lot, so after January 20, 2021 nobody would care about a minor thumb on the election interference scale like this.

My hunch from what little I know about Bourla, a Greek Jew from Thessaloniki, is that he wasn’t out to get Trump. He kind of seems like the type of buccaneering Easterner who tends to like Trump. In fact, his aggressive clinical trial protocol was Trump’s best hope for an October Surprise on the vaccine front.

But he was clearly under enormous pressure from Respectable Society to not announce good news before the election.

On 3 November, they hit the 62 mark and FDA approved the protocol changes. It then took several days to check the stored samples—and they also had new ones coming in that they could test, too. Combined, these samples led to the 94 cases presented to the DMC on 8 November. (The results were publicly announced the next day.)

In contrast, StatNews writes that the analysis of results wasn’t revivified from the deep freeze it was put into in October until November 4, at which point there were 94 cases:

Gruber said that Pfizer and BioNTech had decided in late October that they wanted to drop the 32-case interim analysis. At that time, the companies decided to stop having their lab confirm cases of Covid-19 in the study, instead leaving samples in storage. The FDA was aware of this decision. Discussions between the agency and the companies concluded, and testing began this past Wednesday. When the samples were tested, there were 94 cases of Covid in the trial. The DSMB met on Sunday.

As it turned out, the vaccine blew the doors off, coming in well over 90% efficacy. From an interview with Bourlas in Axios:

DP: The FDA obviously had this 50% threshold for efficacy kind of its baseline. Obviously everyone would like 100% efficacy because why wouldn’t you in a vaccine? What was Pfizer’s target? Or at least where did you think this was going to come in?

AB: The reason why we’re not giving a specific number is first of all, we are not even telling our teams what the specific number is. And also the number would change. So for example, if it is 91, it could become 92. If it is 94, it could become 95, or vice versa by 1 point. So we don’t want to confuse people with different numbers, but it is more than 90 and I believe will remain more than 90.

In other words, after 94 of the planned 164 cases in the trial, the vaccine is so far above 90% efficacy that it will almost certainly turn out to be over 90% effective when all 164 cases are collected.

In other words, this is great news.

As I wrote in my column,

The best coronavirus strategy that any president could come up with has always been to be president when vaccines start rolling out. Thus Trump long claimed that a vaccine would succeed real soon now, while Democrats downplayed that idea and spread fear, uncertainty, and doubt about vaccines.

It’s reasonable to say that on scientific and ethical grounds, if not political and financial grounds, this good news should have been released to voters at the latest of Monday, November 2nd.