How Far Back Did Americans Accept Interracial Marriage?

We are constantly lectured by unpaid interns at online magazines about just how virulently sexist and racist America was until, well, some dim point in the distant past before they started paying attention, such as 2005. In reality, a lot of attitudes changed quickly and fairly smoothly a long time ago due to the Sixties social revolution. 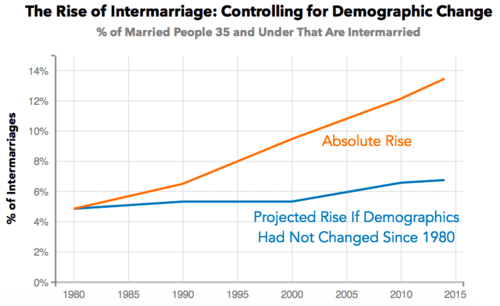 For example, the propensity toward interracial marriage among people under 35 way back in 1980 was already 72% as great as it is today.

Why Is Interracial Marriage on the Rise?

So what would America’s intermarriage rate look like if the country had not become more diverse? In the chart [above], the blue trend line is our estimate of the rate of intermarriage if the demographics of the young married population had not changed since 1980 – the orange line shows the actual increase.

While there is still an increase, it is not even close to what we saw in the first chart.

Our “no-demographic change” estimate suggests that intermarriage would have only risen to 6.7% if demographics had not changed – a 1.9% increase, dramatically smaller than the 8.6% increase actually observed.

In other words, changing beliefs is responsible for only a fraction of the increasing intermarriage rate.