Here’s a new word for your diverse vocabulary: “charla.” It’s Spanish and means a Q&A session with an immigration lawyer. The one pictured below was put on in Houston, courtesy of Catholic Charities, which routinely acts as an active anti-sovereignty enabler of lawbreaking aliens. 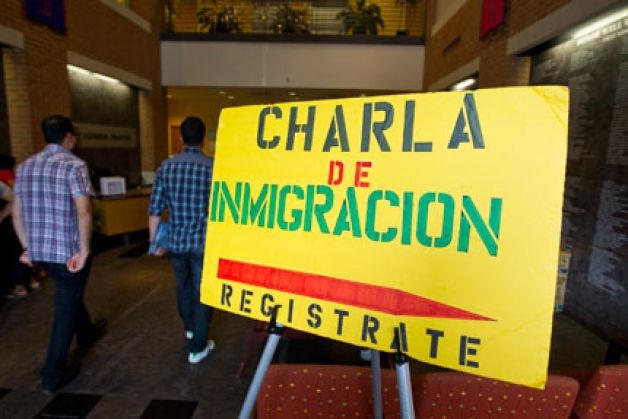 It’s interesting that the possession of a GED is now a qualifier for Obamnesty. The high-school equivalency test can be taken in Spanish, and in California at least, there is no mention on the certificate that the holder did not pass the test in English. Just how hard can a Spanish GED quiz be?

In addition, how strictly will government check whether DREAMy kids really fulfill the pathetic criteria? The under-30 age requirement could be bypassed with high-quality fake documents. (See my 2010 blog, DREAM Recipients: How Many Millions Will Try to Pass for Under 30?)

Another morsel below: the DREAMer must “have no serious criminal record.” So what divides serious crime from unserious? Inquiring minds want to know.

Would the young MS-13 gangster Edwin Ramos have been eligible for Obamnesty before he murdered three members of the Bologna family? After all, he came to America at age 13, and had only assaulted someone on a bus and robbed a pregnant woman as a juvenile. That makes Ramos a victim in the minds of some.

In at least one previous version of the DREAM Act (upon which Obama’s amnesty is based), gangster activity was not a prohibition (see Senator Jeff Sessions: the New DREAM Act Is Worse). So my musing is not groundless.

Immigrant attorneys and advocacy organizations in Houston have reported being “bombarded” with phone calls and inquiries since President Barack Obama’s announcement Friday of plans to allow illegal immigrants brought to the U.S. as children to apply for work permits.

Immigrants started lining up for the free, monthly immigration legal counseling offered by Catholic Charities of the Archdiocese of Galveston-Houston before 9 a.m. Tuesday – more than four hours before the scheduled start of the event, said Jo Ann Zuniga, a Catholic Charities spokeswoman.

The “charla” – a meeting where immigration lawyers take questions from immigrants – starts at 1 p.m. Tuesday at Catholic Charities’ office at 2900 Louisiana St.

Wafa Abdin, the legal director for the Cabrini Center for Immigrant Legal Assistance, said attorneys plan to explain what documents the government may require in order for immigrants to show they qualify for the temporary protection from deportation, called deferred action, which will last for two years and can be renewed.

Those who receive deferred action also would need additional paperwork in order to apply for work permits.

There as yet no formal application process for the new policy. Department of Homeland Security officials said it could take up to 60 days before they publish formal instructions on how to apply. DHS officials said illegal immigrants who are under age 16 should wait until their 16th birthday to apply unless they are in formal removal proceedings.

To qualify under the new policy, an illegal immigrant must have entered the U.S. before turning 16, must have lived in the U.S. for the last five years, have no serious criminal record, and currently be enrolled in school, have a GED or have already graduated, Department of Homeland Security officials said.

An estimated 1.39 million illegal immigrants – including about 170,000 in Texas – would be eligible under the guidelines outlined by the administration, according to the Migration Policy Institute, a nonprofit think tank that researches immigration issues.