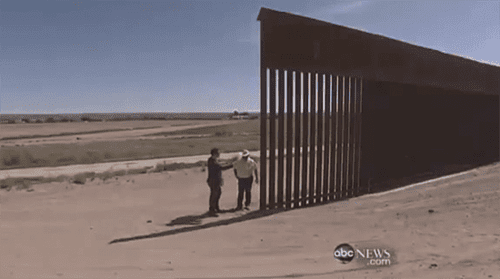 Congress is back in the big capital city, and that means the occasional important hearing. On Wednesday, the House Oversight Committee met to discuss Violence on the Border: Keeping U.S. Personnel Safe.

One important point: only 40 percent of U.S.-Mexico border is considered under operational control.

The testimony of Brandon Judd, President of the National Border Patrol Council, got some attention for his description of worsened border violence and details like “one in every five arrests last year by the Border Patrol was a criminal alien.” (Text version.)

Here we are, one day from the anniversary of 9/11, and the border remains wide open, welcoming jihadists as well as Mexican drug thugs.

20 percent of illegals caught at border have criminal records

Less than half of the U.S.-Mexico border is under “operational control,” and one out of every five illegal immigrants caught there has a criminal record, the chief of Border Patrol agents’ labor union told Congress Wednesday when detailing violence that increasingly spills over the international boundary.

Brandon Judd, president of the National Border Patrol Council, said the level of criminal activity belies claims that because fewer illegal immigrants are being caught, the border has improved in recent years.

The dangers were highlighted earlier this year when a Customs and Border Protection helicopter was fired upon while flying near Laredo, Texas, forcing it to make an emergency landing — though nobody was injured. Officials have blamed the Zetas cartel for the incident.

And he forcefully objected to the State Department’s decision to change pay for its employees at consulates in northern Mexico, which will cost many of them their hazard pay because the department no longer deems the region unsafe.

Mr. Starr retorted that he wakes up every day with his employees’ safety in mind, and insisted the situation on the ground has improved for most consulate employees in northern Mexico.

“Sir, I’ve walked that ground, I’ve talked with those people. I look at our security every single day. There is nobody that is more concerned with the security of our people overseas than I am,” he said. The status of the border sparks an intense debate, and it’s not just an academic question.

President Obama has said the border is secure enough that Congress can turn its attention to legalizing the estimated 11 million illegal immigrants already in the U.S. Many Republicans in Congress, and now many of those seeking the GOP’s presidential nomination in 2016, dispute that, saying that no action can be taken on legalization until more is done on enforcement.

Mr. Judd said agents on the border have no doubt that more is needed.

He said based on what they tell him about how much of the border is under operational control, “we would be lucky if we’re [at] 40 percent.”

Operational control is deemed to be when agents have a good chance of deterring or catching almost all illegal crossers. The Obama administration canceled use of the yardstick in 2010, but has yet to replace it with another public measure, leaving Congress struggling with how to judge progress.

Robert L. Harris, director of Customs and Border Protection’s joint task force in charge of combating border violence, declined to estimate how much of the border was under control, telling the committee it wasn’t his purview.

But he did say immigration patterns have changed in the decades since he joined the Border Patrol, with Mexicans declining as a percentage of illegal immigrants and Central Americans rising. That means deportations are tougher, because they are sent to noncontiguous countries, and there are more legal protections.

Mr. Judd said the level of criminal behavior among those trying to cross illegally is also a major concern.

All told, 91,000 criminal aliens caught by the Border Patrol were deported last year, he said, compared to about 486,000 total illegal immigrants caught — a ratio of about 1 in 5. Nearly half of the criminal aliens deported had aggravated felonies on their records, Mr. Judd said.

Some Democrats blamed border violence on U.S. gun laws, saying that Mexico’s laws are strict, but Mexican cartels are able to get high-powered weapons from the U.S. and smuggle them south.

“If we can stem illegal gun trafficking in the United States, there’s no doubt the positive effects will be seen by our neighbors to the south,” said Rep. Elijah E. Cummings, the ranking Democrat on the committee.

He and fellow Democrats introduced a bill Wednesday making it a felony to traffic in illegal guns.

Mr. Chaffetz, though, said if Democrats wanted to crack down on illegally trafficked guns heading to Mexico, they should be trying to get to the bottom of the Fast and Furious operation run by the Obama Justice Department that knowingly allowed thousands of guns to be shipped illegally into Mexico.

“They gave out nearly 2,000 AK-47s to the drug cartels, and we want to look at that,” the Utah Republican said.