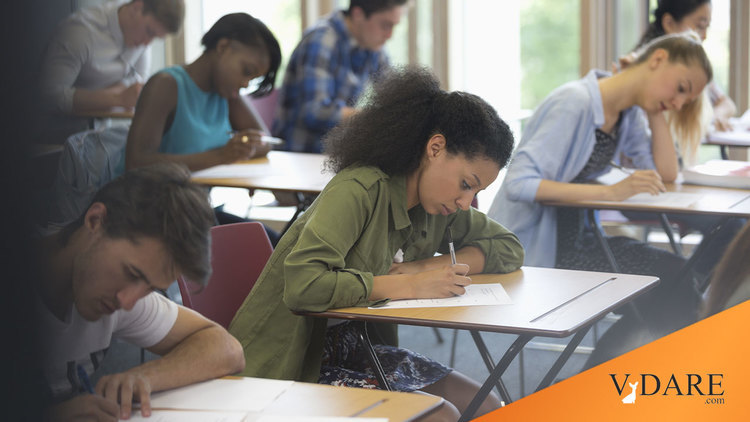 But when you think about it, a non-college world in which high school graduates acquired the skills they wanted on the web or in ad hoc classes and proved their worth by performing well in actual jobs might be a preferable form of meritocracy. a) There would be no “signaling” of status for life, the way an Ivy League degree now signals status for life. The elite wouldn’t necessarily be getting Ivy League degrees; b) post-high school life would become a mad scramble for skills in which luck would inevitably play a greater role. That’s a good thing if it prevents people from concluding that richer = better. More than ever, richer might just = luckier; c)  A skill-by-skill scramble would value a multiplicity of discrete talents–are you a good computer programmer? a painter? a musician? writer?–instead of one general talent (“smarts”). You wouldn’t need to be well-rounded to join the elite. You’d just have to be good at something. It’s harder to insinuate that a programmer is better than a musician or writer the way it’s currently possible to  insinuate that a high-SAT Yale grad is better than someone whose scores could only get him into a state school. …

This is an interesting point: that the kind of "holistic" college admissions that the Supreme Court endorsed in its 2003 pro-affirmative action ruling in Grutter claims to evaluate everybody in some overall "holistic" sense that, in effect, says some people are better overall than other people. The purpose of the Supreme Courts' call for holistic admissions was to fuzz up the margin so nobody could be certain than affirmative action was being practiced. But holistic admissions, by their stated goal of analyzing all aspects of the applicants, suggest that people can be ranked holistically (i.e. overall).

In contrast, consider Caltech, which doesn't do much affirmative action and doesn't really care that much about qualifications outside of test scores, grades, and evidence of extreme science or engineering talent / desire. I went to high school with one kid who got into Caltech and my younger son went to school with one kid who got into Caltech. Both of these Caltech-bound kids were extremely Aspergery to the point of autism. The reaction of other kids to these guys getting into Caltech was: "Hey, that's cool! You must have really high test scores! (I'm still glad I'm not you.")

On the other hand, Harvard trumpets that it has holistic admissions, and most students take away the implied lesson that those who get into Harvard are just overall better than you are.

Middle-aged Syracuse grad Aaron Sorkin's screenplay for The Social Network was supposed to be about what a flawed individual Harvard's Mark Zuckerberg is, but every high school student I talked to about the movie was of the opinion that they wished they were as awesome as Mark Zuckerberg.