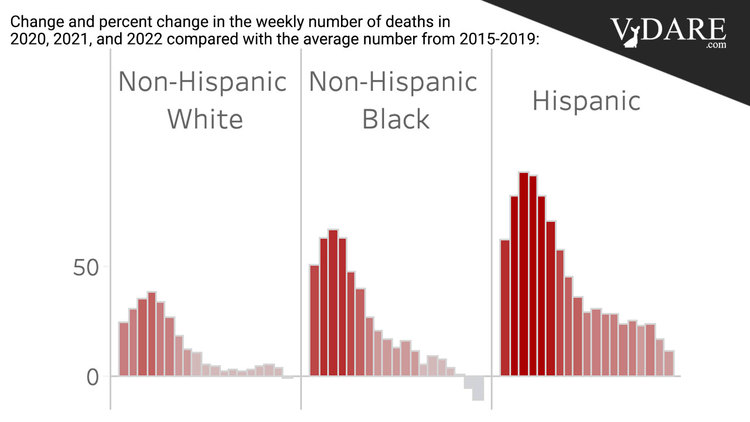 Hispanics Have Been Hit Much Harder By COVID Than Have Blacks

But nobody pays much attention to Hispanics these days. Between the first and second waves of COVID deaths, the Narrative coagulated that blacks were dying a lot due to 1619, redlining, and Emmett Till and there was nothing they could ever do about it. But in reality, African-Americans were doing a striking amount to reduce their COVID death toll. We are now two years out, and it’s remarkable how much blacks have done to limit their death rates from COVID. COVID is spread through gregariousness, and blacks tend to be more gregarious on average than other American races. So they were hit hard when COVID, a disease that punishes people for doing that which is best in community life—talking, laughing, singing, dancing—came out of the blue in early 2020.

For example, rural Americans were largely spared during the first wave of March-April 2020. But, due to bad luck, the emotional late February 2020 funeral of a black janitor with a big family in southwest Georgia became a superspreader event.

It’s important to note that COVID wasn’t like AIDS or monkeypox. When your brother the janitor dies, it’s perfectly reasonable to laugh, cry, and hug with your loved ones. In February 2020, the siblings of janitors could hardly be expected to know that their very human reactions were spreading an infection they’d never heard of.

But African-Americans apparently did a pretty impressive job of adjusting their behavior over the rest of 2020 to make themselves less vulnerable to COVID (in contrast to their sharp increases in deaths by shooting and car crash after 5/25/20). But there’s not much market for journalism about how blacks are successfully reducing racial disparities by changing their behavior on their own initiative, so nobody has much noticed.

In contrast, Hispanics appear to have been more fatalistic about COVID, which has led to a higher COVID death rate among Hispanics than among blacks since mid-2020.

Which approach will turn out to be wiser in the long run is a matter of opinion.