Remember Robert Ponsi? He was a server at James Joyce Pub in Baltimore. He was fatally stabbed by a group of black males in January of 2016. One of the black males who participated in the execution of Ponsi was the son a community activist.

Remember Kimberly Leto? She was a bartender at O'Donnell's Pub in Baltimore. She was murdered by two black males in 2014. One of the black males who murdered her was the son of a police dispatcher. 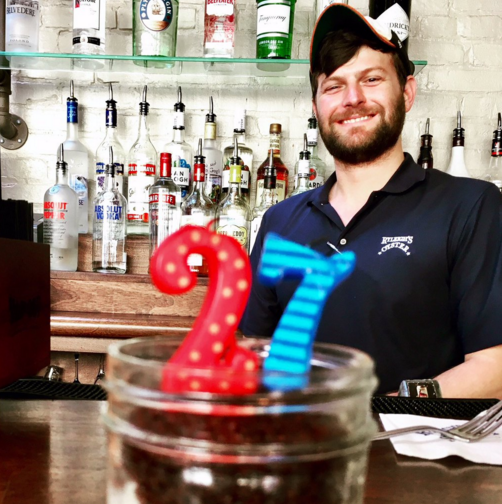 The white working class in 70 percent black Baltimore has no community to support them, nor advocacy group to promote their interests.

It was a world-class city then; now, it's nothing more than another Mogadishu in the making.

So, who is the next member of the white-working class to pay the Eloi tax in 70 percent black Baltimore? Sebastian Dvorak, who worked at Ryleigh's Oyster.

A well-known Baltimore bartender was fatally shot in the head early Tuesday morning, and his family is pleading for help.

Police said Sebastian Dvorak was found around 2:45 a.m. Tuesday in the 2600 block of Boston Street in Canton bleeding from his forehead. Police later confirmed someone shot him in the head, killing him.

Baltimore City police haven't released much information on the shooting, but did reveal Wednesday that investigators believe the motive is robbery and there could be more than one suspect.

Dvorak was well-known in the Baltimore service industry and known as "Seb" to his close friends.

Dvorak's family is pleading to the public for help. His father, David Dvorak, read from a prepared statement as police look for his son's killer.

"If they saw anything or heard anything, or even check their security devices for any recordings, to please — I beg you — to contact the police," David Dvorak said.

David Dvorak said the loss of his son has devastated many people.

"He was exceptional in every possible way. He lit up every room and was loved by so many. We cannot express how painful this loss is for us and so many others," David Dvorak said. "Sebastian could carry on any conversation on any topic. He never made you feel inferior in any way. He engaged you in those conversations, and he was incredibly intelligent and incredibly smart."

Matt Drechsler, a close friend of Sebastian Dvorak, was with him Monday night prior to his killing. He and a large group of friends went barhopping in Canton Square. Drechsler had to leave early, but he said he believes his friend could have been simply trying to walk home.

"It just turned into a horrible night," Drechsler said. "It's just a random, horrible incident. It's getting worse in the city where you can't even walk home at night, you know what I mean?"

Police have reviewed security camera video from area businesses, portions of which they released to the public Wednesday evening. Police said the people seen in the video are considered a person of interest in Dvorak's killing.

Police described the person of interest as a black man with thick curly hair and a medium complexion. He was wearing a gray T-shirt with a white tank-top underneath, blue jeans and gray New Balance sneakers.

Police said the man is seen in the surveillance video putting glasses on his face while walking down Eastern Avenue.

With black violence in 70 percent black Baltimore reaching levels never before seen in an American city, police are forced to work 12-hour shifts in a last-ditch effort to maintain law and order.

In July of 2015, the Freddie Gray Youth Empowerment Center was opened in Baltimore, to help black children become... empowered?

Baltimore should be a world-class city, just as it was in 1917.

But something changed: the racial system was flipped, with black people taking control of the city's political structure as well as moving into houses and neighborhoods where once white people thrived. Strangely, as Baltimore became blacker and blacker, it came to resemble the dreaded eponymous district in H.P. Lovecraft's The Horror at Red Hook.

Nothing thrives in 70 percent black Baltimore today, save black crime.