His Name Is Mark Schlemmer: White Father of Two "Mistakingly" Gunned Down by Black Male in St. Louis 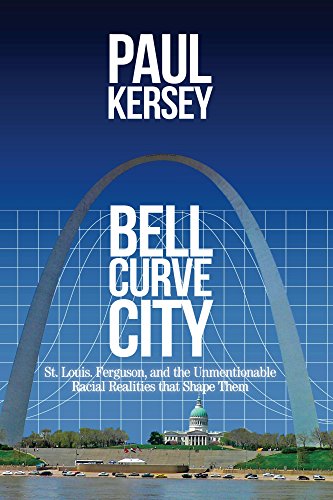 We call St. Louis “Bell Curve City” (hint: Pick up a copy or two of Bell Curve City: St. Louis, Ferguson, and the Unmentionable Racial Realities That Shape Them). Why? Because so many racial truths are found in the 49 percent black / 43 percent white city.

What do we mean? Well, 89 percent of homicide suspects in 2018 St. Louis were black, showcasing the color of the crime in the city.

And to start off 2020, we find out yet another of the near record setting homicides in 2019 St. Louis was black-on-white.

His name is Mark Schlemmer, a white male and father of two beautiful teenagers. He went out one Halloween night for some fun, and ended up just another victim of black homicide in Bell Curve City.

['I think my brain is still trying to process’ |Daughter coming to terms with loss of father shot on Wash Ave.: “I just want whoever killed my father to be taken away for a long time. I want justice for him,” said Sierra Schlemmer, KSDK.com, November 5, 2019] Sierra Schlemmer says her father was a happy go lucky kind of guy who loved to take pictures and was inseparable from her and her sister.

“We always took pictures. He was just a very caring person. He was a good, goof-ball kind of guy who was always the life of the party,” said Sierra.

Schlemmer says she last saw her father on October 26th when she celebrated her 18th birthday.

“He gave me a birthday present and everything. I hugged him and I told him that I loved him,” said Sierra.

She couldn’t believe what happened to her dad six days later.

A short time later, Sierra said her dad, his friend and a young woman left an after-party at Europe nightclub near 15th and Washington Avenue, hopped in his friend’s car and were about to leave when a guy pulled up in a white Malibu with a gun.

Prosecutors have charged a person in the November shooting death of a Collinsville man outside a nightclub in downtown St. Louis.

Leron Harris, 25, of the 1000 block of Andrews Drive in East St. Louis, faces charges of first-degree murder and armed criminal action in the Nov. 1 killing of Mark Schlemmer. Harris was charged Dec. 23 in St. Louis Circuit Court and was in custody Friday in Georgia in an unrelated case.

Schlemmer, 38, was fatally shot across the street from Europe, a nightclub off Washington Avenue, about 2:15 a.m. Police said he was wearing a Halloween costume and leaving a party with friends when he was shot.

Two witnesses told police Schlemmer had stepped into the front passenger seat of a car that was about to drive off when Harris pulled up in a vehicle, tried to block the car Schlemmer was in, and fired a shot intended for someone else in the vehicle.

The bullet instead hit Schlemmer in the head, killing him. After the gunman fired the fatal shot, police said, he backed his vehicle down 15th Street and hit at least two parked cars. The gunman then ran off, leaving the damaged vehicle behind.

Police said Harris and the woman he tried to shoot had a previous relationship and he had been texting her throughout the evening.

After the shooting, Harris texted the woman and told her to throw away her phone and to report that someone had stolen the car she, Schlemmer and another person were in, according to the charges.

A witness told police the shooter wore a distinctive mask and identified the mask in a photo posted to Harris’ Instagram page, charges said.

Harris was taken into custody Nov. 15 in Marietta, Georgia, after a high-speed chase. He was in custody there Friday, but a booking photo was not available.

Harris admitted fleeing the St. Louis area because he was suspected of a homicide, according to court documents. Court records don’t indicate whether he has an attorney.

Schlemmer was a painter with two teenage daughters. His girlfriend told the Post-Dispatch in November that he dressed up like a burglar for Halloween and attended a party at the City Museum, then later went to the Europe club at 710 North 15th Street.

Rest in peace, Mark Schlemmer. May your family find peace in knowing your killer has been found.