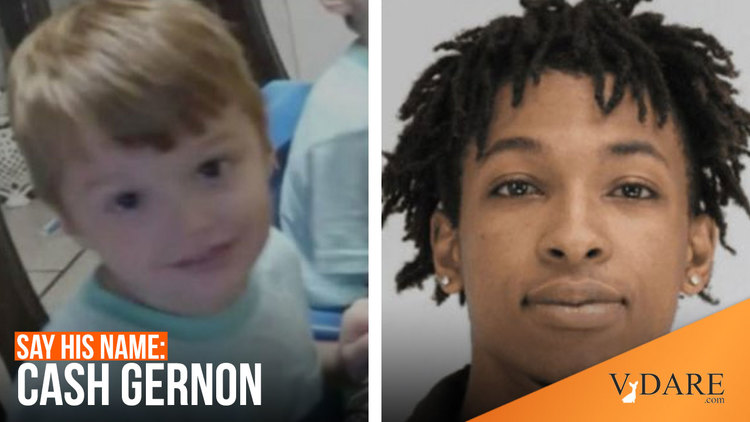 His Name Is Cash Gernon: Four-Year-Old White Baby Abducted By Black Male And Stabbed To Death In Texas

His Name is Cash Gernon.

A 4-year-old white boy, abducted from his home and stabbed to death by an 18-year-old black male.

Were America a nation truly dominated by systemic racism, implicit bias, structural inequality, white privilege, and, yes, even white supremacy, we’d know his story and how this toddler was murdered far beyond any apocryphal story of the Emmett Till era.

The Dallas County Medical Examiner has ruled the death of a 4-year-old boy whose body was found abandoned in a southwest Dallas street early Saturday a homicide, adding that the child later identified as Cash Gernon died from multiple stab wounds.

Meanwhile, court documents are helping to provide a timeline of what may have happened on that Saturday.

According to the arrest warrant affidavit, Gernon was abducted from a home on Florina Parkway where he and a sibling had been living with an acquaintance of his father. The father, according to police, vanished in late March. The boys’ biological mother reportedly had been searching for them.

According to the arrest warrant, a man was seen on home surveillance video at about that time removing the child from his crib.

At approximately 6:40 a.m., a neighbor out for a morning walk sees the child’s body lying in the street on Saddleridge Drive — approximately eight blocks away.

“The closer I get to it, I can tell it’s a human because I see hands… and I see legs,” said Antwainese Square, who later called 911. “To see a child covered in blood in the middle of the street? It’s truly traumatizing.”

Within minutes, a swarm of officers descended on the neighborhood of neat homes and well-tended lawns in the Mountain Creek area of Dallas.

“This started about 7 in the morning,” says Joe Bubel, sharing that police knocked on his door.

“They said to me ‘do you have any children in your home? small children? I said ‘no, I don’t…I said are you looking?’ And they said ‘well, we have a young boy’…”

According to court documents, the father’s acquaintance who had been caring for the four-year-old and his sibling “At about 10:48 am, Witness… called 911 to report that a 4-year-old white male could not be located.”

Neighbors at the time questioned why it took so long for someone to notice that he was missing.

“Nobody came looking for this child!” questioned Toronda Alford, “This child was four! Who didn’t know their child was missing during this period of time?”

FBI agents could be seen carrying bags of evidence from the woman’s home on Saturday. According to court documents, she later identified 18-year-old Darriynn Brown as the man seen on home surveillance video taking the child from his crib.

Brown was arrested and booked into the Dallas County jail on Saturday night — charged with burglary and kidnapping. He is being held on a $750,000 bond.

Brown’s mother defended him on Monday, insisting that he had been “set up” and that he was incapable of hurting a child, adding that there was “more to the story.”

Meanwhile, strangers mourn the child’s loss, acknowledging that nothing will change the tragic ending.

“No matter what happens, it’s not going to bring that little boy back,” said Bubel.

A four-year old white boy, abducted from his room and murdered by a black male… hardly local news in the United States of America, but were the nation replete with white privilege, systemic racism, and implicit bias as those proponents of Critical Race Theory maintain, Cash Gernon’s murder at the hands of an 18-year-old black male would be justification for the type of actions Rome once visited upon Carthage.