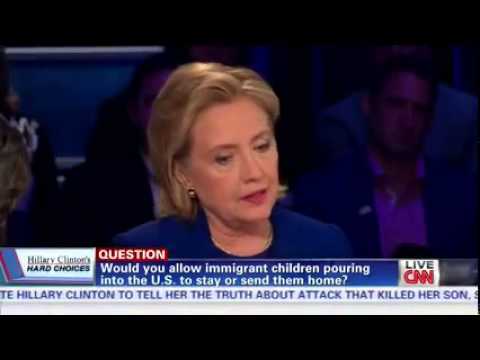 Hillary On The Border: Does She Remember The 1980 Marielito Riots In Arkansas?

Steve Sailer's post The Brat Effect: Hillary Says “Send Them Back” is based on the Daily Mail's take on Hilary Clinton's CNN Town Hall event: ‘Send them back’: Hillary says wave of illegal immigrant children should be ‘reunited with their families’.[By David Martosko, June 17,2014]

There are two things that make the Daily Mail a better source of news than the American MSM—they haven't internalized the suppression of race and crime stories that the NYT has, and they don't care who wins the American elections, so they won't downplay a "gaffe" that might affect Hilary's chances.

Here's the clip they posted of Hilary and Christiane Amanpour:

Here, via Ann Althouse, is the transcript of that. [CNN Town Hall - Hillary Clinton's Hard Choices, Aired June 17, 2014 - 17:00   ET] Clinton, asked about amnesty, is for it, but the current Border Surge gives her a slightly different feeling:

CHRISTIANE AMANPOUR, CNN HOST: And what about right now?

AMANPOUR: Such an important issue. And what about right now? As we're seeing thousands of children come across —

AMANPOUR: — shantied off into makeshift shelters.

AMANPOUR: Hard choice — let them stay in the United States or send them back?

CLINTON: Well, two quick points. One, the numbers are increasing dramatically. And the main reason I believe why that's happening is that the violence in certain of those Central American countries is increasing dramatically. And there is not sufficient law enforcement or will on the part of the governments of those countries to try to deal with this exponential increase in violence, drug trafficking, the drug cartels, and many children are fleeing from that violence.

AMANPOUR: Should they be able to stay here? It's safer.

CLINTON: Well — it may be safer but that's not the answer. I do not —

AMANPOUR: Should they be sent back?

CLINTON: Well, first of all, we have to provide the best emergency care we can provide. We have children 5 and 6 years old who have come up from Central America. We need to do more to provide border security in southern Mexico.

AMANPOUR: So, you're saying they should be sent back now?

we've got to do more. I started this when I was secretary to deal with the violence in this region to deal with border security.

But we have so to send a clear message, just because your child gets across the border, that doesn't mean the child gets to stay. So, we don't want to send a message that is contrary to our laws or will encourage more children to make that dangerous journey.

AMANPOUR: We're going to go on to a different topic...

You know, if a Republican had come out for deporting "children", I don't know if Christine would have changed the subject.

Now for a trip down memory lane. Hilary is the wife of former Governor of Arkansas Bill Clinton. In 1980, she was living in the Governor's  Mansion as First Lady of Arkansas. Then there was the Marielito Crisis, when Castro released all his criminals and Bill Clinton had 25,000 of them housed at Fort Chafee, Arkansas, where they rioted.  And in 1981, there was a Republican in the Governor's  Mansion, and his wife was First Lady of Arkansas.

Alaskan Ryan Kennedy put it this way, in a letter to VDARE.com:

Ironically, [Bill] Clinton was the best recent president on immigration (which isn't saying much). This is because the only election Clinton ever lost in his life was right after the Mariel boat-lift. He blamed Carter who allowed the boat-lift which created problems in Arkansas during a riot by refugees at an Army base. It became an issue in the campaign that he lost.

Remember, this doesn't mean Hilary is suddenly reliable on immigration. She's for amnesty, and is left-wing Democrat, and a member of the Religious Left.

What it means is that the Clintons are much better politicians than Barack Obama,  because they achieved everything without affirmative action.