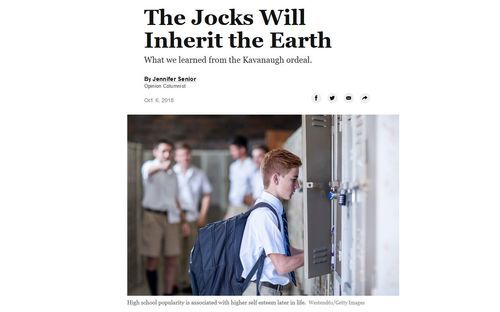 The Jocks Will Inherit the Earth

What we learned from the Kavanaugh ordeal.

… But Kavanaugh’s confirmation also proves something that every former high school freak, floater or orchestra nerd has secretly known all along: The overlords of the cafeteria really do inherit the earth.

For those who lived at the margins during high school — and I was one of them, an adolescent made of nerve endings and giant hair and an outsize desire to ingratiate — this is a bitter pill to swallow. The fantasy in most of our imaginations (and Hollywood’s: See “Heathers” or “Mean Girls”) is that this gang gets its comeuppance once it’s disgorged into the real world.

But it doesn’t. The academic literature about the fate of the high school in crowd is quite clear. The Renate alumni do very, very well. The future has a name, and it is Squi.

Perhaps the most imaginative paper to support this idea was published in 2001. The psychologist Jacquelynne Eccles and two colleagues asked 900 10th graders in Michigan to determine which of the “Breakfast Club” characters they identified with the most: the Jock, the Brain, the Princess, the Basket Case or the Criminal. (A tad crude? Sure. But find me another study involving John Hughes that survived peer review.)

Roughly a decade later, the researchers checked in. The male Jocks still had the highest self-esteem. They also drank more than any other group, even the Criminals. The Brains were next. (“I liked beer. I still like beer.”)

In 2012, a group of economists published an intriguing paper showing that popular boys in adolescence earned 10 percent more than those with low status — 35 years later. High school popularity had consequences, including lucrative ones, in the labor market.

“Whether you’re looking at popularity, athletic status or attractiveness — all of the data tell you the same thing,” the sociologist Robert Crosnoe, president of the Society for Research on Adolescence, told me. “You carry forward into adulthood this legacy of how you operated when you were in high school. What better training ground to learn that you have power and wield it? And why wouldn’t you think you’re good enough to yell at senators on live television and be a Supreme Court justice 40 years later? You’ve had 40 years of confirming evidence!”

Crosnoe himself published a book in 2013 about the enduring effects of high school, noting that men and women who were rated good-looking as teenagers made more money than their peers who were merely rated average, even 15 years later, regardless of how they looked in their 30s. He used a sample of thousands of people. …

Now does this mean that former geeks and outsiders don’t stand a fighting chance in adult life? Of course not. The tech world is teeming with triumphant nerds, and in 2008 we saw the brilliant ascent of an outsider in politics.

Uh, Obama was a popular, dedicated jock in high school, who chose Occidental College in part because he thought he’d have a chance of walking on the basketball team (he quickly found out when he got there that he was in no way good enough for even Division III bball.

Socially, he was quickly adopted at college as a social ornament by the very rich Pakistani crowd, friends of the Bhuttos.

Barack Obama felt betwixt and between throughout his adolescence, at loose ends about his racial identity and his place in the world.

Obama’s post college girlfriend in NYC was the daughter of the Australian intelligence officer who later was appointed Australia’s ambassador to the US. She was the stepdaughter of a prominent Washington lawyer (whose dad was a famous Washington lawyer) and he was head lawyer for one of the world’s biggest mining companies.

Obama was always seen by elites as a cool guy destined by his excellent manners and mild charisma for a career in international relations, such as the Foreign Service.

It was only when he began working as a community organizer that he began to see the many points of commonality he had with his fellow humans.

Obama’s girlfriend during his community organizer years wasn’t some girl from the ‘hood, she was a Eurasian grad student at U. of Chicago who became an academic expert on Korea and is now tenured at Oberlin.

“They’d offer a story to match or confound mine, a knot to bind our experiences together — a lost father, an adolescent brush with crime, a wandering heart, a moment of simple grace,” he wrote in “Dreams From My Father.” “As time passed, I found that these stories, taken together, had helped me bind my world together, that they gave me the sense of place and purpose I’d been looking for.”

Actually, it took Obama all the way until his 40th birthday, after he got over his year-long depression after being defeated by Bobby Rush in 2000, to understand how best to market himself: as the black politician that liberal whites have been dreaming of: the guy who is genetically black enough but who acts like a white Foreign Service officer.

Politics became a means for him to reduce the distances between people, and therefore to reduce their sense of shame.

Whereas insiders, members of an exclusive club, tend to induce shame, not reduce it. Which may explain why this moment has surfaced so many ancient feelings of teenage dread. ..

Jennifer Senior, who most recently was a daily book critic for The Times, is a new Opinion columnist.