Once again, we have a story about recipient of the Bronze Star who did not, apparently, receive the award for valor in combat.

The last time I wrote about this, I debunked the idea that David French, the neocon lawyer the neocons thought would mount a challenge against Donald Trump, had a bronze star for valor from his service in Iraq. In fact, French was a military lawyer. He did not receive a Bronze Star for combat service. 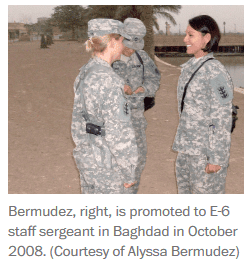 Nothing is wrong with that, but we all know what the average person thinks when he sees “Bronze Star:” The recipient earned it for battlefield heroics.

This time, the Bronze Star hero is one Alyssa Bermudez. She, too, The Washington Post tells us, received the decoration for service in Iraq. [She says she was harassed by superiors. Now she protests outside the TSA for hours. By Manuel Roig-Franzia November 30, 2016]The story includes picture of Bermudez standing at attention in battle dress uniform, or BDUs as they are called.

These she chose. They mattered to her. They would be her uniform, as much as combat boots and fatigues once had been. For Alyssa Bermudez, these heels, that dress, the makeup — they all meant that she was something new.

They represented her evolution from Bronze Star soldier to professional woman. Yet now she marches in them. On the streets of Arlington — not the sands of Iraq. She hoists a protest sign instead of a rifle. She draws stares rather than salutes. [Emphasis added]

Not exactly. According to her profile at Veterans in Film and Television, Bermudez’s military occupation specialty was military intelligence—the kind of office work that, as they said in World War II, “frees a man to fight.” Her Bronze Star, the Post says  was awarded for “Excellence”,rather than valor—she "led a team that made complex maps to be used by field commanders." 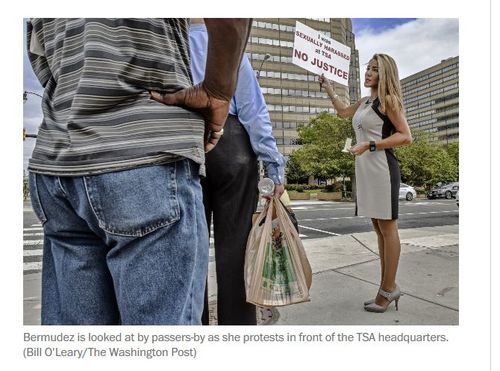 I strongly doubt a woman intelligence sergeant E-6 in Iraq ever experienced actual combat. If she had, certainly the Post would have led with a tale of valor under fire. Given the push for women in combat, no writer or editor at the Post would have let the chance pass to prove that women can fight just as well as men. Of course, the media do tend to exaggerate these claims.

As with French, I’m happy to be proven wrong.

Now, why was Bermudez in the Post? Because she is staging a protest in a tight dress and spiked heels protesting sexual harassment during her employment at the Transportation Security Administration.

The lesson here, I guess, is that the Iraq-War heroine has brought her derring-do back to D.C., where’s she’s fighting the “culture” at TSA.

For the record, aspiring actress Bermudez belongs in front of a camera, not at TSA, and certainly not in the military.