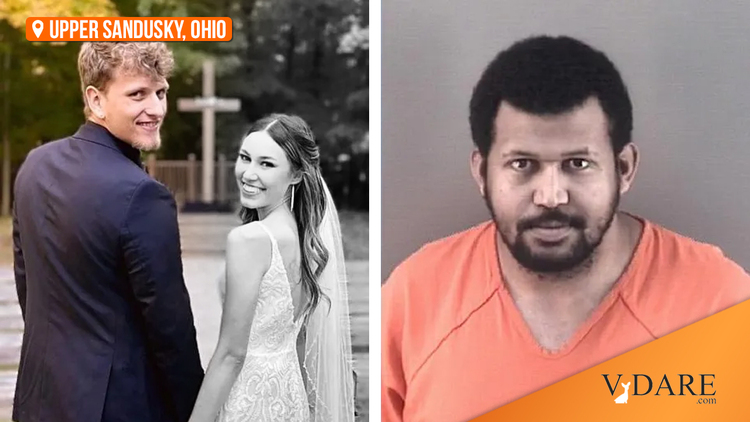 Her Name Is Keris Riebel: White Female Newlywed Hacked To Death By Black Male On New Year's Day At A Dollar Tree

On Twitter, Pedro Gonzalez put it succinctly: “On New Year’s Day, Bethel Bekele—apparently an Ethiopian immigrant—entered a Dollar Tree with a machete, approached Keris Riebel while she was working, and hacked her to death. Police don’t have a motive and, for some odd reason, this isn’t a national story.”

Her name is Keris Riebel, a white female newlywed hacked to death by a black male as she simply tried to perform her shift at a Dollar Tree.

UPPER SANDUSKY, Ohio — A man is charged with murder after he allegedly attacked a dollar store employee with a machete in northwest Ohio Sunday afternoon. Officers with the Upper Sandusky Police Department were called to the Dollar Tree at 1120 East Wyandot Avenue for a report of a man waiving a machete around inside the store.

Officers arrived at the store and found 22-year-old Keris Riebel dead at the scene. The man, who police identified as 27-year-old Bethel Bekele, left the store before police arrived. One of the officers found the suspect a short time later on South Fifth Street and arrested him. Investigators learned Bekele entered the store with the machete and struck Riebel multiple times. The weapon was found at the scene.

Police said the motive behind the fatal machete attack is unclear. Detectives are looking into whether Riebel and Bekele knew each other. 10TV spoke with the victim’s family who said they are devastated by the loss of Riebel. They say she was a newlywed and describe her as “an amazing, kind and sweet young woman who lit up the world with her smile.” Residents of the tight-knit community say they are horrified by this loss. “It’s like terrifying to see something like this in Upper Sandusky, because this is a nice community,” said resident Jason Pierce. The Chief of Police Jason Lucas said nothing like this ever happens in Upper Sandusky. The last murder was in 2001. The Wyandot County Major Crimes Unit is currently investigating the incident. Police said additional charges could be forthcoming once the investigation is complete.

Were white privilege real, every individual connected to the black male who murdered Keris Riebel would be facing consequences.

In a world where white privilege were real and omnipresent, every black individual who dared take the life of an innocent white person would see their entire family, to the fourth generation, face dire consequences.

The American Experiment is ending.

The architects of Jim Crow knew the truth, though our Marxist overlords demand we forget.

For every Keris Riebel, the sting of reciting Emmett Till’s memory loses its potency.