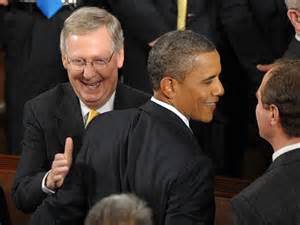 In a triumph for President Barack Obama, sweeping legislation to strengthen the administration's hand in global trade talks advanced toward Senate passage Thursday after a showdown vote that remained in doubt until the final moment.

The 62-38 vote, two more than the 60 needed, came from a solid phalanx of Republicans and more than a dozen Democrats. But the decisive thumbs-up came — literally, and long past the allotted time — from Democratic Sen. Maria Cantwell of Washington after she and a few others seized the moment as leverage to demand a vote next month on legislation to renew the Export-Import Bank.

"It was a nice victory. We're going to continue and finish up the bill this week," Majority leader Mitch McConnell, R-Ky., and Obama's most important Senate ally on the trade bill, said after sealing the agreement that Cantwell, Republican Sen. Lindsey Graham of South Carolina and others had sought.

Well, if Lindsey Graham is in support of the bill, obviously Middle America can rest easy, as its best interests are being jealously protected.

In what is surely unrelated news,

The new Republican-led Congress is drawing harsh reviews from the public – including most Republicans. Just 23% of Americans say congressional Republicans are keeping the promises they made during last fall’s campaign, while 65% say they are not.

On both measures, the public’s views are far more negative than they were of the Democratic-led Congress in March 2007, after the Democrats regained control of both chambers following several years of Republican control. Views are also much more negative than they were in April 1995, shortly after the GOP had gained control of the House and Senate for the first time in four decades.

The key finding here is that Republicans are sick of voting for a Congress that promises to fight Obama and then turns right around and goes out of its way to help him.

More importantly, the argument Republicans made when they surrendered on Obama's Unilateral Executive Amnesty  was that it was simply too politically unpopular to force a government shutdown. We all want politicians who are willing to go to the mat for our preferred position, but politics is the art of the possible and such an objection is at least reasonable. I disagree with it, as immigration patriotism is popular (in fact, it is what got them elected) but such a claim could at least theoretically be true.

But if you undertake actions which make you dramatically unpopular, indeed far less popular than the controversial "Republican Revolution" Congress of the 1990's, then we simply can't take these "practicality" excuses seriously. It's not that the GOP is afraid of being unpopular, it's afraid of doing anything its base wants on immigration. The Republicans are quite willing to undertake politically disastrous actions if it means taking care of the Cheap Labor Lobby.

In a way, we should be grateful for the TPP fiasco. It's the definitive, closing, final case study that proves the Republican Party leadership is both corrupt and politically incompetent.