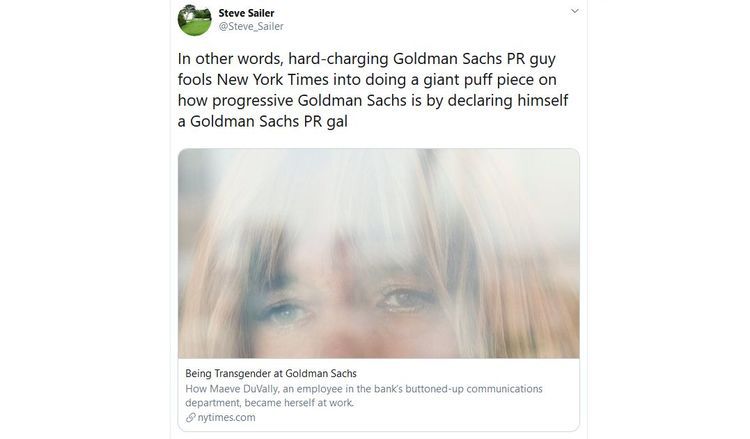 DuVally is the Managing Director of Media Relations at Goldman Sachs. From Glassdoor:

I wonder how big an incremental bonus DuVally will get at the end of the year for landing this big Pride Month article in the NYT?

Like I’ve been saying, these late onset (DuVally is 58, has 2 ex-wives and fathered 3 kids) M to F transgenders are the Navy SEALs of SJWdom.

If you look up “Michael DuVally” on the Internet, you find a whole bunch of embarrassing articles in which the chief Goldman Sachs flack is trying to slide Goldman out of yet another scandal. E.g., from the New York Times in the Jho Low/Wolf of Wall Street embezzlement case:

A former Goldman Sachs banker charged last year in connection with the looting of billions of dollars from a Malaysian sovereign wealth fund pleaded not guilty in Brooklyn federal court on Monday, just hours after being flown back to the United States.

The banker, Roger Ng, had been in custody in Malaysia since he was charged with helping the country’s former prime minister and others embezzle at least $2.7 billion from the 1Malaysia Development Berhad fund, known as 1MDB. …

Mr. Ng, 46, is one of two former Goldman bankers federal prosecutors have charged in the case…. The authorities contend that Mr. Leissner and Mr. Ng paid hundreds of millions of dollars in bribes and kickbacks to help win the bond underwriting work, which generated $600 million in fees for Goldman. …

The case has prompted a serious criminal investigation for Goldman, which has said it could face a substantial fine in the United States. Malaysian officials also want Goldman to pay up to $7.5 billion in damages….

“We continue to cooperate with all relevant authorities as the process continues to move forward,” Michael DuVally, a Goldman spokesman, said in a statement.

I’m sure he has close to the highest salary job in the public relations profession, but still … Or from Bloomberg:

Two years ago, Tania Mirchandani, a Goldman Sachs Group Inc. vice president in Los Angeles, told her boss she was pregnant with her third child. He was skeptical she could balance a large family with her demanding job, she recalled. That’s “a lot of mouths to feed,” she quoted him as saying….

Mallory referred questions to Goldman, which denied any bias in her dismissal. Spokesman Michael DuVally said she had been terminated “for strategic business planning reasons” that had nothing to do with her pregnancy or leave. As part of a review of the company’s private wealth management business, male managers also lost their jobs, he said.

“Goldman Sachs is committed to supporting employees who are new parents, and takes its obligations and the laws relating to them very seriously,” DuVally said in an email. …

“Decisions about team assignments within the office or client relationships are driven only by performance,” said DuVally, the Goldman spokesman. …

Goldman denied any such pressure. The company’s policies — 16 weeks of paid leave to primary caregivers, both natural and adopting parents — “are explicitly designed” to support new parents, DuVally said. …

DuVally said Goldman “denies that Ms. Mirchandani was terminated for any other reason than strategic business planning reasons.”

Or from the NYT:

John Hughes holds a portrait of his son Thomas, a Wall Street banker who committed suicide in May. Mr. Hughes said his son generally liked his job, relentless hours aside, and found the work rewarding and stimulating.

… But Mr. Hughes died at a time when sensitivities about the pressures of Wall Street on young professionals are acute. Just a month earlier, Sarvshreshth Gupta, a 22-year-old first-year banking analyst at Goldman Sachs in San Francisco, committed suicide after a particularly stressful stretch at work. Around that time, another Goldman first-year analyst in the health care group who had worked 72 hours straight was hospitalized after having a seizure. (Goldman declined to comment about either episode.) Two years before, Moritz Erhardt, a 21-year-old investment banking intern at Bank of America Merrill Lynch, died after having an epileptic seizure while he was taking a shower to prepare to return to the office after working the previous 72 hours without sleeping.

… In June, Goldman introduced a policy for the 2,900 undergraduate summer interns in investment banking: Leave the office before midnight each day. No more all-nighters. “The policy is consistent with our goal of providing each intern with a challenging and meaningful experience,” said Michael DuVally, a Goldman spokesman.

Investment banking firm Goldman Sachs followed up on an announcement made earlier this year on Monday morning, stating that it has agreed to settle federal and state investigation probes concerning the sale of toxic residential mortgage-backed securities (RMBS) in the time leading up to the financial crisis. …

Michael DuVally, a spokesman for Goldman Sachs told DS News, “We are pleased to put these legacy matters behind us. Since the financial crisis, we have taken significant steps to strengthen our culture, reinforce our commitment to our clients, and ensure our governance processes are robust.”

But to call him Michael DuVally is to Deadname him. If you look up Maeve DuVally, however, you find a lot of You Go Girl-Yasss Kween commentary on how brave she is.