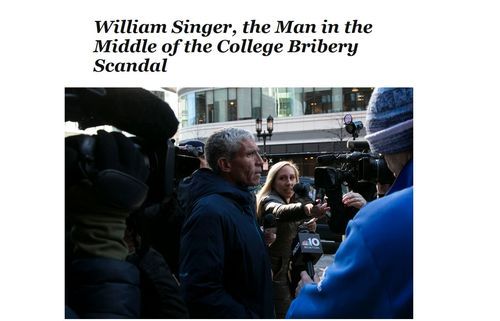 William Singer, the Man in the Middle of the College Bribery Scandal

… He bribed college coaches, he said, to falsely certify that students had been recruited for the school’s sports teams. Prosecutors said he also falsified ethnicities and other biographical details in some cases, to take advantage of affirmative action.

The essay and test fraud seems pretty ho-hum, while the sports fraud is wild: I can imagine a million ways for it to go wrong, like you are a football coach and you take a bribe to get some uncoordinated rich kid admitted as your ace placekicker and then your real placekicker gets hurt and the dean who has had his eye on your scam insists you send out that dork you swore was the next Adam Vinatieri and the kid whiffs the field goal and and then goes all Garo Yepremian and you lose the Big Game by one:

It is bizarre that parents are paying hundreds of thousands of dollars to get their kids admitted at mid-range colleges as athletes in sports they don’t play. I mean, I could imagine some super competitive sideline dad whose kid is pretty good at a sport bribing a coach to admit his kid so he can brag to his brother-in-law that you didn’t think it would pay off, but now my boy is USC’s pole vaulter.

That could be a pretty funny 1970s-1980s sports movie: a grizzled old college coach decides he needs a nest egg to retire, so for his last season he recruits the worst rich kids whose sidelines dads will pay him huge amounts of money to get their sons on the field. In fact, I’m surprised that movie wasn’t made a generation ago.

But, back to the subject at hand, I haven’t seen anything else about affirmative action fraud, which is an awfully interesting subject, going back to Soul Man a third a century ago. I imagine you could make a lot of money off parents just by acting like you know what you are talking about, since nobody else seems to have any credible information on the subject (I’ve looked).