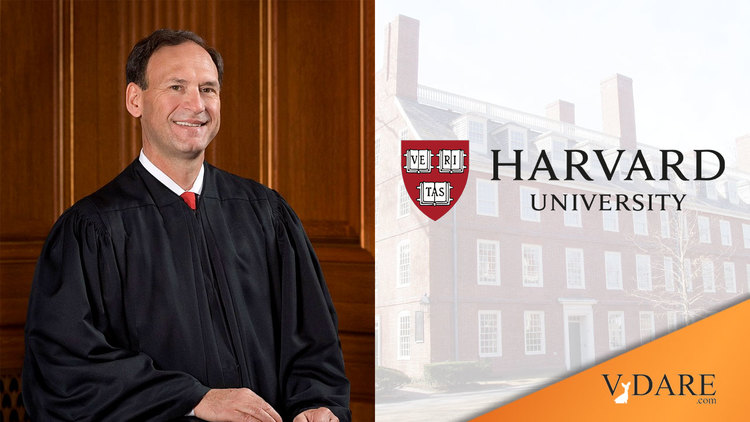 Harvard To Justice Alito: To Be Honest, We Use Race To Triage The Lame Asians From The Cool Blacks

From the Supreme Court’s oral arguments this week over affirmative action, we see that America can’t have an intelligent discussion anymore about race:

MR. WAXMAN [Harvard counsel]: That’s correct. And what she said is the record will not allow a full explanation of that because, if the — the — this — this — there is — there was no evidence with respect to what teachers said, what guidance counselors said, what these students wrote — wrote about. But what we can say with respect to the allegation of discrimination in this case, which was the — the — the definition of discrimination that was at issue in Bakke and Grutter and Fisher and which their expert, which their lawyer got up at opening statement and said: When we talk about discrimination in this case, we’re talking about discrimination in admissions outcomes. And here again, the district court found and the court of appeals also concluded that there was no evidence of discrimination in admissions outcomes against Asian Americans —

Sure, this may sound like Fetterman-level gibberish, but you have to understand that Harvard is a poor institution that can’t afford one of those expensive articulate lawyers to explain their very clear and simple argument to the Supreme Court.

MR. WAXMAN: — whatever you think about the personal rating, which is, after all, simply a number that —

CHIEF JUSTICE ROBERTS: Justice — Justice Alito would like to ask a question.

MR. WAXMAN: I’m not trying to filibuster you.

JUSTICE ALITO: Then I will ask one more question on this.

MR. WAXMAN: I just — I — I want to make one other thing clear to the extent that it’s not clear from the record. The personal rating, like the academic rating and the extracurricular rating and the athletic rating, is a number that is put down by a “first reader.” That is, the file comes in, it’s not usually complete, and just as a matter of triage, one of the 40 admissions officers goes through and gives these numerical numbers.

“Triage” gives the game away. From Wikipedia: “In medicine, triage is a practice invoked when acute care cannot be provided for lack of resources. The process rations care …” In other words, it means letting many applications die a quick death in sizable part due to the race of the applicant.

Triage involving race is the opposite of the purported image of “holistic admissions” in which we are supposed to believe that admissions staffers are some combination of Solomon, Socrates, Jesus, and Chekhov who come to incredibly subtle discernments about the true worth of each applicant.

Instead, Harvard is admitting that one staffer reads through applications, paying particular attention to race, and directs them to the “Another Lame Asian-REJECT” or “A Cool Black-CONSIDER” piles.

It is — the testimony was it is not considered in any way once the subcommittees and committees meet. It “fades into the background.” It is not the basis of admissions decisions. And so not only did the court find as fact that those — that that slight disparity was not evidence of discrimination even in the personal rating, it had no effect with respect to outcomes.

MR. WAXMAN: — it’s not that it makes no difference whatsoever. Look at what the expert testimony was, and I realize we’re —

JUSTICE ALITO: Then why do you do it?

MR. WAXMAN: — as both courts found.

JUSTICE ALITO: Then why do you do it?

JUSTICE ALITO: If it doesn’t matter, why do you do it?

MR. WAXMAN: We do it as a matter of triage. Right now, Harvard is getting — last year got 61,000 applications for 1600 slots. And it is an entirely rational way of figuring out where — how you’re going to allocate your attention to ask an admissions officer, as the file is being developed, just go through in a very rough way and rate a particular application based on what you can see on these four metrics. The fact that Asian Americans got a marginally, on average, a marginally lower personal rating score is no more evidence of discrimination against them than the fact that they got a marginally higher rating than any
data can show on academics and extracurriculars. It doesn’t mean that they’re either smarter or people think they’re smarter.

God forbid that anyone believes that Harvard thinks that Asians are smarter on average than blacks! It’s just some statistical nonsense that we should all ignore. After all, what are statistics? They’re just social constructs!

Harvard’s lawyer should have told the Supreme Court the truth: “OK, OK, I know my arguments sound stupid. But trust me, we’re Harvard, we’re not stupid. We’ve been famous for 386 years because we understand marketing. Do you want to know the real reason we are discriminating against Asians and in favor of blacks? It’s because everybody loves blacks! My God, man, don’t you watch any TV commercials?”